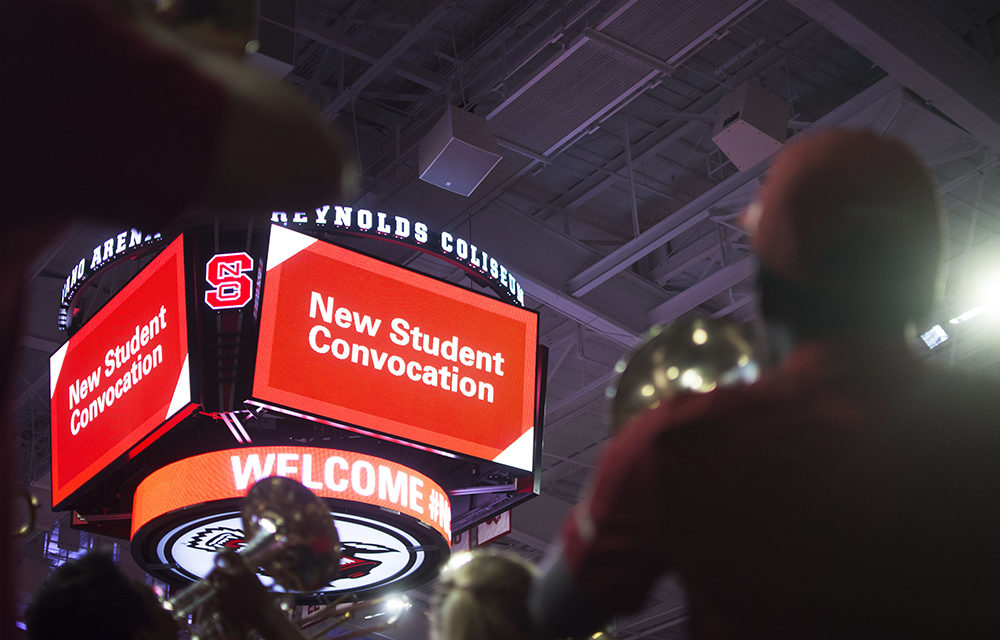 The Class of 2023 was officially welcomed to NC State during New Student Convocation in Reynolds Colesium, Monday, Aug. 19.

College can present challenges for many students. Not knowing where to find important resources, feeling homesick, and questioning whether you belong are common feelings among students. For first-generation students whose parents did not receive a four-year degree, these worries can be magnified, but F1RST at NC State is working to change that.

Jean Ferman, a third-year student majoring in polymer and color chemistry and human biology, is the president and co-founder of F1RST. The need for this organization came from the realization that resources directed at first-gen students were lacking.

“There was really nothing for first-gen students except first generation celebration day and the first in the pack reception, so aside from events in August and November there was nothing more,” Ferman said.

A quick search of “first generation” on the NC State website supports this. First in the Pack, the initiative focused on helping first-gen students build connections is one of the few results that actually provides resources. But as mentioned, the university website doesn’t list events to connect first-gen students outside of the fall semester. The site also doesn’t have a functioning calendar, so students interested in finding other events are instead met with an error message. This emphasized the need for an ongoing program to support first-gen students.

As a first-year in Student Government, Ferman and other student leaders came together to create an initiative to bring resources to first-gen students. The group discussed how the university could provide more support and met with offices, including TRIO and New Student Programs, to discuss what they thought should be implemented on campus. As a result Nav1gate, a summit for first-year and transfer first-gen students, was brought to campus. But the group still felt like more could be done.

F1RST officially became a student organization in January 2019 during Ferman’s sophomore year. He described the creation of F1RST as one that came from wanting to continue advocating and providing support for first-gen students.

“We just all started sharing our stories of how there wasn’t really that much support, we couldn’t find a community to confide in because no one really felt comfortable asking questions,” Ferman said.

This is a reality for many first-gen students. Navigating college is hard enough and not knowing the “hidden curriculum” on how to succeed in college doesn’t help. The lack of familiarity on the basic workings of college can be detrimental for students who were not exposed to the college culture from family members.

Things like not knowing how to build connections with professors and other faculty or having to figure out how to secure financial aid and housing alone can put first-gen students at a significant disadvantage compared to their peers. Academic, social, and financial barriers stunt the potential growth a student could have during their time at college, which is what F1RST hopes to address.

Moving forward, the organization wants to continue growing and make a permanent space for first-gen students.

“We hope to build that community of support that we once wished we had when we were first-year students here on campus,” Ferman said. “Hopefully by starting the dialogue the university can see that this is something that students care for and an office or space can be provided”

As of right now, the group holds monthly events, often collaborating with other student organizations or offices on campus. In October, F1RST, along with the Peer Mentor Program and African American Textile Society, held a First-Year Q&A. In the future, they plan on holding a vision boarding party to help participants set smart and attainable goals.