I Am A Man: AACC Gallery Honors MLK 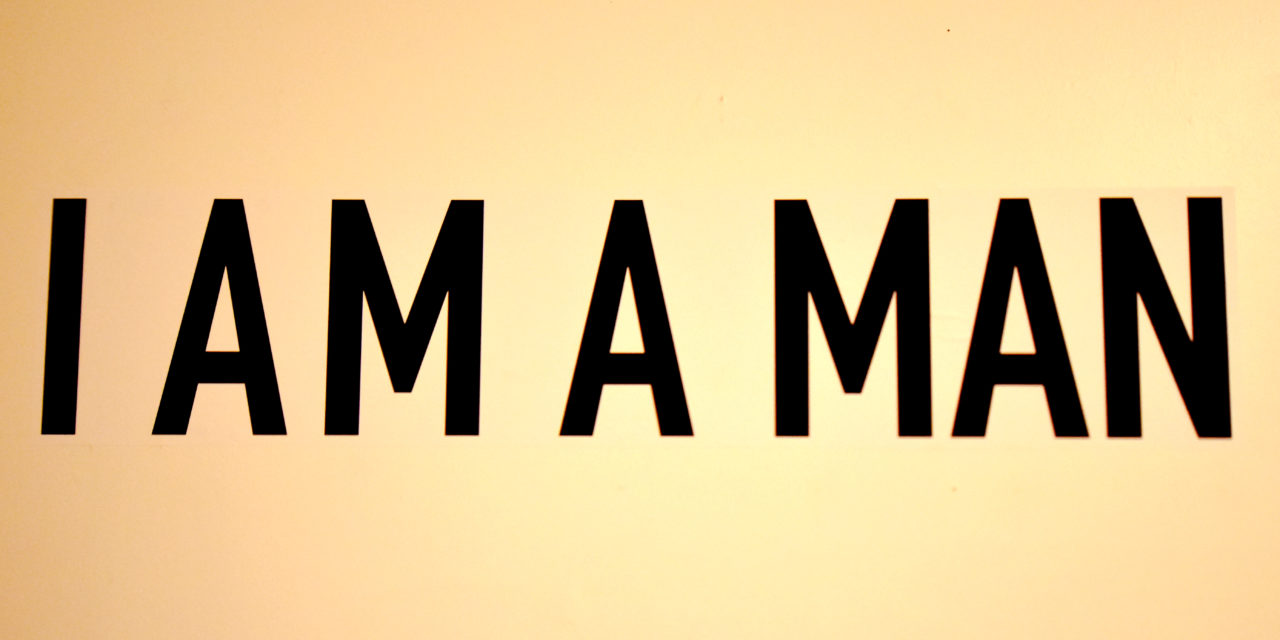 The phrase “I AM A MAN” is written on the wall at the “I Am A Man” exhibit in the African American Cultural Center Art Gallery.
Emma Dimig/Nubian Message

The African American Cultural Center Gallery opened their doors on January 16 to honor the late Dr. Martin Luther King Jr., with an exhibit that recognized and illustrated the work that he did in the Civil Rights Movement, the leader he was, and the huge imprint he left on this world.

The exhibit entitled ‘I Am A Man’ is a collection of artwork designed by second-year students from the 2017-2018 academic year under the direction of Dr. Derek Ham and Scott Townsend, professors in the College of Design.

The idea for the exhibit came from a virtual reality experience that Ham was working on that included the Memphis Sanitation Workers’ Strike of 1968 and the events surrounding Dr. King’s death.

Ham’s goal is to tell the complete story of events.

“The reason I was involved in all of this… I think I was drawn to parts of the story that people either didn’t know or have forgotten,” Ham said. “So I was trying to find new technology to tell the whole story, and that’s what the exhibit is about, is to kind of tell a broader story that is a part of history that is sometimes overlooked.”

Participants can partake in Ham’s award-winning virtual reality experience along with the visuals by placing a reservation through the AACC’s website.

According to Moses T. Alexander Greene, the director of the African American Cultural Center, the virtual reality experience will include the opportunity to march alongside protesting sanitation workers, pick up trash and walk inside of the Lorraine Motel in Memphis, Tennessee.

According to Greene, members of the NC State community are incredibly proud to have the exhibit on campus.

“There’s a great sense of pride that this exhibit is returning to the African American Cultural Center Art Gallery,” Greene said.

In order to allow various opportunities for community members to view the exhibit, the gallery will be operating on extended hours for the next three weeks.

Greene said, “We’ve extended our hours on some weekdays and even on the weekends, so that more people can experience it at their leisure.”

The first participants to view the exhibit were a group of students in the University Scholars Program accompanied by their professor, Ken Johnson.

As the associate professor of the University Scholars Program, Johnson encourages his students to experience the legacy of Dr. King through the exhibit.

“I think it’s important for several reasons,” Johnson said. “I think one, to be aware of the Civil Rights Movement and the different pieces that get lost in the conversation and the sanitation worker strike is certainly one of those.”

He believes it is important for his students to have a familiarity with the AACC.

Carolyn talked about her reaction to one of the panels that mentioned two men were trying to escape and got crushed inside the garbage trucks: “I was not expecting it at all, and I literally gasped.”

The most favored panel was the sanitation worker prayer, which illustrated the gap between the cost of living and wages; a single paycheck could barely cover the cost of one’s rent.

Bryanna Polk, a third-year studying electrical engineering said, “The sanitation prayer stood out the most.”

Ham wants people to be inspired by the work of the sanitation workers and Dr. King because there’s still work to be done. He expressed how people shouldn’t overlook it but have a sense of pride by the work that was done.

He hopes the exhibit makes people reflect on who they are, what they stand for and what they want to achieve.

Click here to see more photos from the gallery opening.

Editor’s Note: This article has been updated to correct Moses T. Alexander Greene’s name and title.