NC State Is NOT Coronavirus Safe 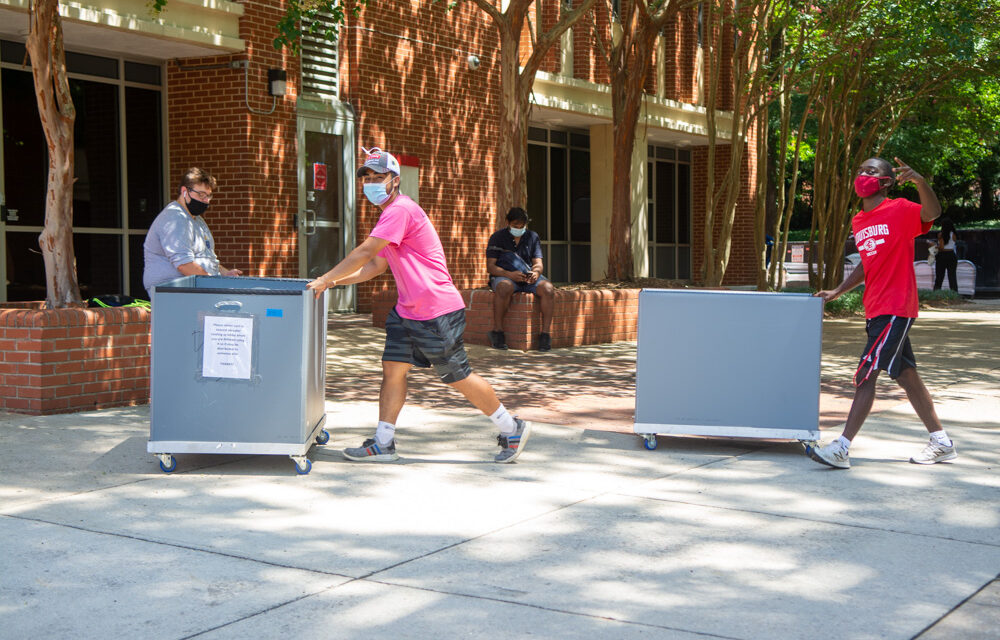 On Tuesday August 4th, Nubian Message was able to speak to an RA on NC State’s campus. The RA voiced their concerns about the move in process and students returning to campus. For the safety and protection of this RA and their job we have chosen to keep their identity anonymous.

NC State began allowing students to move in on campus on July 31. With the arrival of students on campus, the NC State body was able to see the true effectiveness of their policies and protocols.

Nubian: What are your concerns with move in?

RA:  “Housing hasn’t changed like when they are deciding to give out certain information… So for these ten days [of move-in] freshmen are not really aware of all of the rules for the dorms and things so they have been congregating in really big groups and hanging out without masks in common areas… There’s just a lot of areas in housing that it could just so easily pass and there’s not really anything being done about it.”

From as early as the first night on campus students were spreading party flyers, gathering in large groups, and much more without masks or regard for the protocols given. Students were openly posting on social media, clearly showing that they were not following the instructions given by the university

Nubian: How should NC State go about correcting these mistakes?

RA: “They [NC State Housing] needs to be better at informing the freshman… a lot of people didn’t even know there is a rule of how many people can be in their dorm room… It’s not something that’s being publicized. They were also very unclear with the RA’s about how to enforce these rules like they are slowly being more transparent about the guidelines but a lot of it is fuzzy not just for the RA’s but for people higher up.”

Nubian went through NC State’s Policies, Regulations, and Rules and was unable to find a rule stating the limit on the amount of people in a dorm room. We did find that housing has stated that guests will be allowed to visit and stay with students in the residence halls as long as it follows the occupancy limit identified for each individual community type.

Nubian: From what you see do you see that what NC State has put in place is working?

RA: “I don’t think much of what they are doing is working and they also haven’t put much in place. Also right now we’re seeing stairwells that have specific directions but I don’t think anyone is really listening to those… Another big issue is that freshmen are coming in and they don’t know anyone and they are craving friendship and interaction so they’re trying to find ways to do that but we’re not supplying them with anyways to do so.”

Nubian: Where should students be going to find out the information being released?

RA: “NC State is definitely relying on NC state using their own common sense and that’s not happening. We’re supposed to have floor meetings, as RA’s, and typically that happens right at the end of move-in so during that period before the floor meeting people may not know what an RA on duty is, they may not know common etiquette and specifically for this year they don’t know the rules put in place. They are still having us wait so I know my guide for the floor meeting isn’t quite finished yet so I can’t do it until that happens so now we have people who have already been on campus for 4-5 days not knowing any of the material we’re supposed to go over. There is a frequently asked questions page that has many answers just that a lot of people don’t know to look there”

Nubian: Have you expressed your concerns to anyone else?

RA: “Yes, the RA’s have been talking about it. I have informed my supervisor and there has been some promise of action about food meetings and things like that but housing tends to be slow in the way they get things done. My biggest issue is that even if they were to put something in practice right now to let people know the rules making sure they are being enforced correctly it could already be too late because every single second counts when it’s a pandemic that doesn’t take long to spread.”

Nubian: Do you think we will make it to the first day of class before sh*t goes terribly?

RA: “I honestly don’t because if you think about the percent of people in North Carolina that may have it and how many people we are moving in, someone is going to move in during this ten-day period that has it and almost definitely more than one and I think it will get spread very quickly. They have protocols for that but I think it’ll get out of hand like really soon probably in the next month or so.”

According to what has been publicly released, the state of North Carolina now has more than 135, 000 cases of coronavirus, with Wake county having the second-most cases in the state. There have been 2,168 deaths and there are currently 1,109  people currently hospitalized. These numbers are expected to grow especially due to the increased movement of individuals around the country as students begin to migrate back to their colleges and universities.

Nubian: Does NC State have a reporting process and will it be made known that an individual has tested positive for coronavirus on campus?

RA: “The reporting process is to go to student health and call them and tell them that you have it and if you have it in a dorm they’re gonna move you to Avent Ferry or Western manor. “

The RA was unsure if NC State will release a statement if an individual has tested positive for coronavirus on campus. Nubian found that NC State will notify individuals who have potentially come into contact with a person with COVID-19 and the university is keeping track of known campus cases. They will not identify individuals or disclose other personally identifiable information.

Nubian: As a student worker do you feel NC State has provided you with the safety needed to do your job and be a student?

RA: “I don’t. I feel right now that it’s almost impossible to do my job in some ways because the job of an RA is to build community and to keep people safe and those both have huge roadblocks right now. I’ve already tried to do a virtual get together but it seems so overwhelming trying to think of things to emulate what happened last year… I’m not sure how feasible that is.  Also, RA’s do rounds and they aren’t providing RA’s with gloves or anything like that and we’re going through and touching every single door handle and light switch. So our rounds are at night and housekeepers leave early evenings so it’s been probably a couple of hours since they’ve been cleaned.”

Nubian: As an RA what can you do once you see people breaking the rules in place for coronavirus?

RA: “We can write people up and do a full incident report and my understanding is that people will get a warning the first time and the second time it’s like a full student conduct violations issue and if you keep violating it I think you can get kicked out of the dorms and have severe consequences. We [RA’s] can really only tackle room occupancy and not wearing masks in public areas. They only way we’d be able to stop room gatherings is if we see them go in which is a really low odds cause by the time we see them come out it’s too late and if we heard a bunch of people we could knock and see.  But it does feel like even though we can write up reports there’s still this feeling of powerlessness to keep ourselves safe”

Nubian: What is it that you want to tell people?

NC State has put policies in place but this interview shows that there is a lot more that needs to be done. While NC State is figuring out how best to address/fill the evident gaps of information, Nubian highly encourages students to take their own precautions. There are too many people dying from coronavirus and it’s up to us to protect ourselves and those we care about.

We know that y’all haven’t seen each other but it’s very important that we do our part to protect the pack.