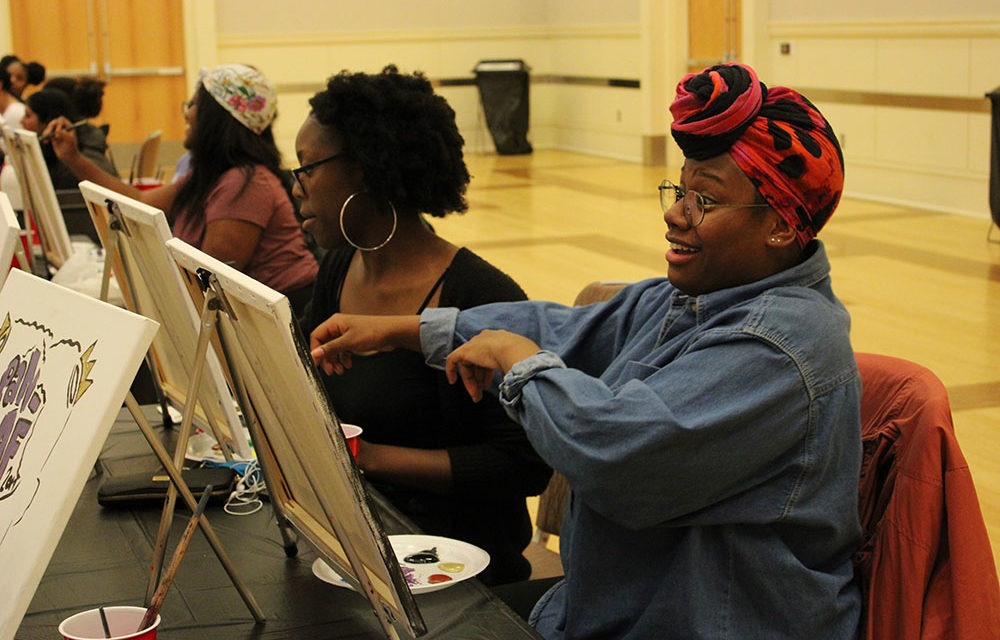 Students were given pre-drawn canvases to start them out, though most painted over and made it their own. Paintings ranged from different designs of Pan-Af posters to people creating their own designs of blackness. A common theme was the illustration of black kings and queens.

Overall, many students had similar thoughts on the event. They liked the idea of black students coming together in a space where they can be themselves.

Jada Silver, a first-year studying animal science said, “It’s fun, I like it, it’s good energy. And there’s not a lot of black people on campus, so it’s nice to see us in a room doing something together.”

“I love it, I get to see all the black people, and being with friends and painting, and people that listen to the same thing I listen to, makes it casual,” Steele said. “We go to a PWI, so it [the event] feels like family”

Some students loved listening to trap music while painting because it was relaxing and livened the mood.

“It’s my first time coming, and I like it for sure,” said Sabrina Spencer, a fourth-year studying communication. “I don’t listen to trap music, but its hype and a good stress-reliever before finals. It’s reductive, it’s like painting for your soul.”

Students were encouraged to sing along and dance to their favorite trap song. There was even a ‘recess’ that invited students to stop painting and dance and have fun with friends.

D’Alex Thomas, a second-year studying civil engineering said, “It’s a cool get together, it gives people a sense of community.”

Sanja Miric, a second-year studying psychology said, “It’s nice to unite black students together and bring everyone together and have fun.”

Other students stressed the importance of having these events on campus.

“I think it’s extremely important to have these events on campus,” said Josie Thompson, a second-year studying elementary education and vice chair of concerts and entertainment at UAB. “I feel like celebrating certain cultures, such as this, having that space where people can feel free to do so with other people who also appreciate that, I think it’s a positive environment.

Bri Murphy, a second-year studying genetics and the concerts and entertainment chair at UAB said, “I love coming to these. It’s not our culture, but I just love experiencing everyone and everyone just having a great time, it’s really great to see.”

Christian Carter, a third-year studying sociology and chair of the Black Student Board said, “A lot of people bump trap music. A lot of black people, people from African descent also love trap music, so it’s a fun way to be painting. You could be dancing, you could be singing along to some of your favorite music… It kind of helps with the social atmosphere of African Americans.”