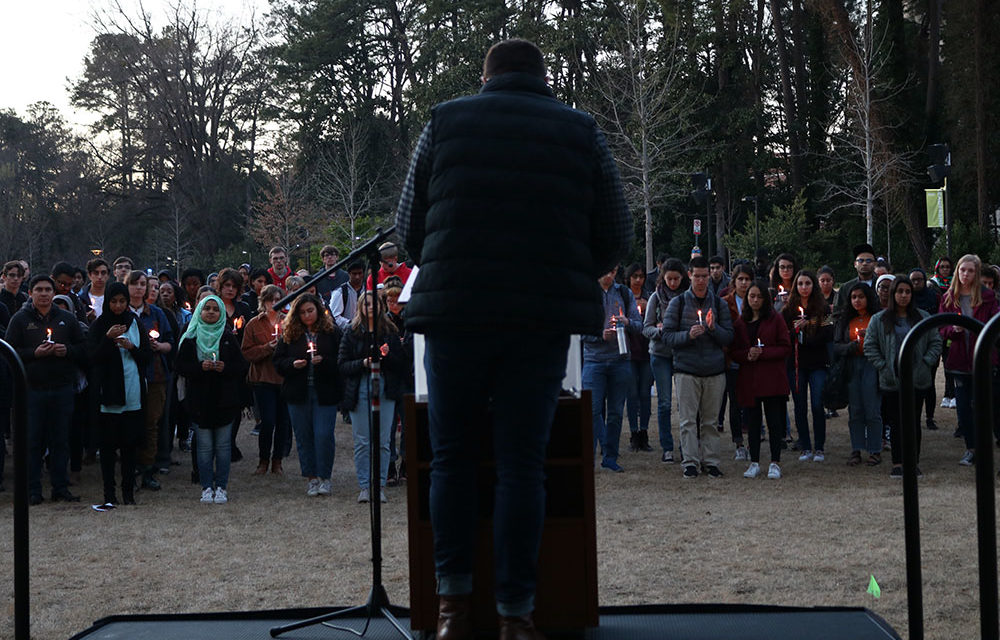 Minh Phan/Nubian Message
Kevin Singer, a graduate student and co-director of Neighborly Faith, speaks at vigil for the victims of the shooting in New Zealand held at Stafford Commons on Tuesday, March 19.

On Mar. 19, over 120 people gathered at Stafford Commons to attend the Community Interfaith Vigil, an event organized by the Muslim Student Association (MSA) to honor the lives lost and affected by the Christchurch mosque shootings and to create a space in which different communities of faith could stand together in solidarity.

Mohsen Zakaib, a third-year studying nuclear engineering, physics and anthropology, is the president of MSA, and said the MSA put the event together in one to two days.

Zakaib began the vigil with an acknowledgment of strength in solidarity.

“This terrorist tried to scare us,” Zakaib said as crowd members passed the flames of their candles to those unlit. “He tried to divide us, and he tried to utterly crush our wills, and we stand today to show him he accomplished the exact opposite.”

Eleven speakers—ranging from NC State students to the NC Senator of district 38, Mujtaba Mohammed—contributed their words of perseverance against these attacks, support for the Muslim community and hopeful visions for the future.

“We should be building tables instead of building walls,” Mohammed said. Students and community members join together in prayer at a vigil for the victims of the shooting in New Zealand at Stafford Commons on Tuesday, March 19. The vigil concluded with a moment of silence to honor the 50 slain and the others wounded. (Minh Phan/Nubian Message)

“We need to continue to unite,” Mohammed continued, “to work towards starving out the sickness and recognize that our diversity is our greatest strength, that our world must learn to love fully, care deeply, and most importantly, we must learn the simple act of respect and kindness towards one another.”

Among the student contributors was Sinthia Shabnam, a noted spoken word artist and fourth-year studying political science and sociology, who performed her poem entitled “Where the Heart Is.”

Interfaith support was voiced by various speakers, like Rabbi Melissa Simon, the senior Jewish educator and rabbi at UNC-Chapel Hill, and Kevin Singer, co-director of Neighborly Faith, an organization dedicated to helping evangelical Christians accept and engage with people of other faiths.

Midway through the vigil, time was reserved for the Maghrib prayer, the Muslim prayer just after sunset. At the end, a moment of silence was held for the victims of the shooting.

“That just shows that people care,” he said. “We saw people from every single background, denomination, religion, race, and everything—from all spectrums. Christians, Jews, Musilms—everyone coming together to heal the community, to heal the rifts created by this crime committed in New Zealand.” Students hold candles to honor the victims of the shooting in New Zealand at a vigil held at Stafford Commons on Tuesday, March 19. Community members joined together in solidarity with members and friends of the Muslim community following the mass shooting. (Minh Phan/Nubian Message)

Hanadi Ibrahim, a second-year studying textile technology, attended the vigil and thought it was “big enough to make an impact, but small enough to where people get to talk and know each other.”

She also felt the vigil was helpful to people like her who needed to process the shooting and acknowledge their desensitization to such tragedies.

“When you deal with those emotions,” Ibrahim said, “The things that you fear and the pain you go through don’t become unknown anymore, and you want to get to know that. When people get to know their fears, there’s a lot more clarity in the world.”

Another attendee, Noor Shehata, a first-year studying political science, said, “One of the biggest things when it comes to vigils like these is to have a place to grieve. I know…a lot of people carry these silent burdens that we don’t like to talk about, and events like these create a filter for people to come and speak about these topics and have important discussions about why this happened. And we can deal in going forward from this.”

Shehata added, “Being able to be at this vigil and feel safe to perform your own prayers also creates a channel of support between allies and Muslims. People learn more.

“Learning about the people you’re supporting so you can give them what they need is incredibly important, and you can’t have that without events like these.”