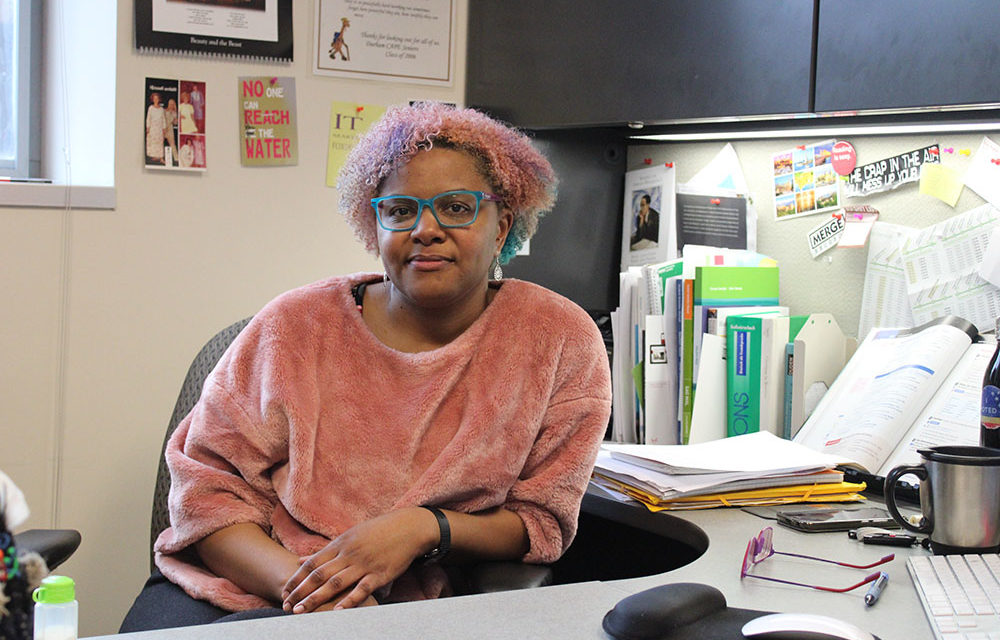 Marissa McHugh/NubianMessage
Michelle Eley, an assistant professor in the department of foreign languages and literatures, sits at her desk in Withers on Wednesday, March 20. Eley teaches German to students at NC State. Over the years, she has lived in various parts of Germany, including Berlin and Essen.

That’s how assistant professor Michelle Eley responds when strangers ask, “What do you do?” But those three words are a vast oversimplification of the complexity Eley’s work brings to German studies.

Eley is an assistant professor in the Department of Foreign Languages and Literatures who teaches courses in German and film studies. She studies how the linguistics of films reveal cultural understandings of national identity, race, ethnicity and gender.

“You have to think at every moment what cultural context you’re working in, in that historical moment, and all of the things that are influencing that,” Eley said. “Working with a film in ‘67 in Germany also means thinking about how are the Germans reading about the Civil Rights Movement in the US. What are the newspapers saying about black people?”

She continued, “All the media that Germans are consuming from America about racial tension is influencing the way they see black people in their own backyard.”

Eley’s interest in Germany began in high school after meeting a German exchange student. After graduating, Eley picked up some German while visiting his family. She entered college with the intention of attending medical school and took German courses on the side.

Eley was also a philosophy nerd. She recalls this being the “final hook,” as she was both blown away and frustrated by modern German philosophers. This made her want to study the language in depth.

“I think the real push for me was when I took a multicultural literature class,” Eley said. “We read an autobiography from Ika Hügel-Marshall, who’s actually visited State a few years ago to talk about her autobiography, and May Ayim, who was one of these central women.”

Eley continued, “We read poetry by [Ayim] and I was just so hit by hearing these black voices in German and finding this common perspective was like, ‘Oh wait, they’re feeling what it’s like to be black in a different context and I understand it, but I don’t understand it.’ It’s familiar but somehow foreign. And that was really attractive to me because it made me think about my own idea of blackness so differently.”

In the 1980s, Hügel-Marshall and Ayim were part of a group of women influenced by and in conversation with Audre Lorde. This group coined the term “Afro-Deutsche,” which translates as “Afro-German.” According to Eley, these women were connecting themselves to an African diaspora identity.

This term provided the language for many black people in Germany to describe their unique experiences and history. Language had been, and continues to be, a challenge in black German studies.

Germany’s history of colonialism and Nazism give the word “race” a very different connotation than the English word. Thus, Eley said, this word isn’t used the same way. In some cases, English becomes the communal language.

“Community, for example, is a word they use in Germany, the English version of it,” Eley said. “I mean there is a German version, gemeinschaft, but it doesn’t have the same thing, it’s not connected to black diaspora.”

In other cases, Afro-Germans create new ways to describe their experiences.

“Black community in Germany is really creating new language, through borrowing, through changing, to make it possible to talk about their experiences in a way that isn’t marred by this damaged German language,” Eley said. “These terms that just don’t fit because of how they’ve been used in the past.”

Eley’s current work focuses on the pedagogy of including diversity in a foreign language context.

“I try to build short poetry, accessible poetry at lower levels…that we can work with that has basic language in it,” Eley said. “That way people can see writing not only from Afro-Germans but also from Turkish-Germans, Korean-Germans and Jewish-Germans.”

“I would like people to be able to see that there is more to Germany than the stereotypical and the canonical image that we get.”