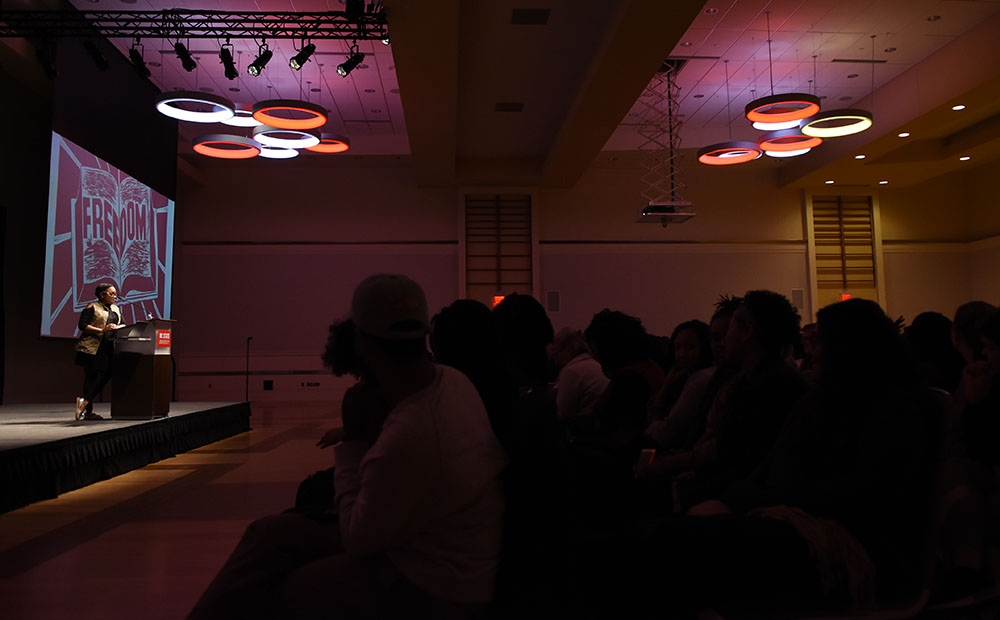 On their event page, the Women’s Center describes Carruthers as a “Black, queer feminist community organizer and writer with over 15 years of experience in racial justice, feminist and youth leadership development movement work.”

Carruthers is one of the founders of Black Youth Project 100, a nationwide organization that encourages political activism in black youth. Carruthers is also the author of “Unapologetic: A Black, Queer, and Feminist Mandate for Radical Movements.”

Carruthers began her speech by recognizing the recent terrorist shooting in Christchurch, New Zealand and addressing the underlying cause behind the attack, white supremacy.

She said, “White supremacy’s tentacles are not just in the southern part of the U.S. as many believe, but all over the world.”

Carruthers then discussed the idea of radicalism and what it means in our current political era. She states that her radicalism is a choice and takes work.

Carruthers continued: “Freedom isn’t always permanent or guaranteed. What I’m after is liberation.”

She used human rights activist Ella Baker to help explain the intricacies of radical protest. She explained that Baker called for radical changes to the oppressive systems present.

“It’s not just about little reforms here and there. It’s about getting down to the root cause of the problem and starting there,” Carruthers said. Carruthers also explained the importance of intersectionality in the movement and the oversaturation the term has endured recently. She also emphasized why it is still essential for substantial progress.

“Intersectionality is a framework of how we understand how people endure multiple forms of oppression,” Carruthers said. “If I want to change things, it can’t be me in a room with my very incomplete perspectives on the world. Our lives are multidimensional and so our power should be too.”

Carruthers exemplified the idea of identifying the root cause of issues by critiquing the treatment of Black women in the past and sharing her experience. She spoke on the martyrization forced onto black women.

Carruthers said, “We love a strong Black woman until that woman is no longer able to hold your work or carry your bull****.”

She referenced James Marion Sims, the “father of gynecology,” and his unethical experiments on enslaved Black women without any anesthesia because he believed Black women had a higher tolerance for pain.

Carruthers used the Reproductive Justice Movement as an example of identifying the root cause: “Black women are four times more likely to die than white women due to pregnancy-related deaths. We sit in a lineage of people who have been forced to benefit everyone else.”

Carruthers concluded her discussion by leaving the audience with 5 questions to ask themselves:

Who am I? Who are my people? What do we want? What are we building? Are we ready to win?

Carruthers used these questions to better prepare herself for her mission. She knew that in order to make the change she wants to see, people committed to the long-term fight are essential.

“Everybody is an expert of their own experience and sharing it. We need to ensure we are creating a space for others to share it.”