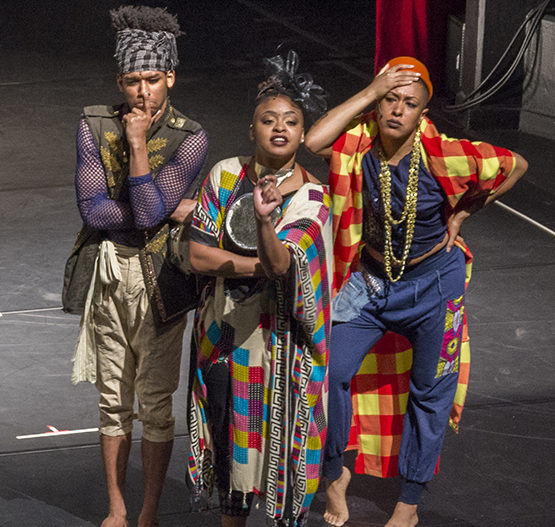 Jessica Hernandez/Staff Photographer
Du’Bois A’Keen, Tendayi Kuumba and Courtney J. Cook, performers in the Urban Bush Women company, list words used to describe Black hair in the “Hair & Other Stories” show in Stewart Theatre on Friday, Feb. 9, 2018. The mission of the Urban Bush Women is to “bring the untold and under-told histories and stories of disenfranchised people to light through dance.” Sarah Cochran/Staff Photographer
The Urban Bush Women performer Tendayi Kuumba sings during the Urban Bush Womens’ performance of Hair & Other Stories at NC State’s Stewart Theatre on Friday, February 9, 2018. Urban Bush Women was founded 30 years ago by Jawole Willa Jo Zollar, who was hoping to establish a company that captures the energy of the African American community and would inspire others.

“Hair became a device to unpack race and unpack gender in a race-based society,” said Chanon Judson, performer and associate artistic director of Urban Bush Women. “There was no YouTube when I came up to share these stories and experiences.”

Along with the performance, Urban Bush Women also hosted three events in the two days leading up to the show. These events included a Community Sing, Hair Party, and a movement jam/dance class.

“What you see on stage is only one arm. Another arm is community engagement,” Judson said.

On the day of the performance, Judson gave a pre-show talk in Talley Student Union. The room was full and some attendees had to stand along the walls.

“If I had arranged this room,” she said, “we would be sitting in a circle, a space where we’re all invited.”

Judson mentioned the company’s efforts to “dismantle the top-down structure” by having co-directors.

During the talk, Judson had the audience members turn to each other and ask, “If your hair could talk, what would your hair say?”

“Everybody’s got a relationship with hair,” Judson said, “whether you got it or you don’t.”

“I hope this leaves an impression on your story,” Judson said before leaving to prepare for the performance.

Outside of Stewart Theatre, the NC State Women’s Center set up a pop-up exhibit titled “The Politics of Black Hair.” The gallery consisted of 12 portraits of black women along with quotes from the women.

Urban Bush Women took to the stage at 8 p.m. for the second time at NC State. The first was in 1993, nine years into the company’s journey.

“You thought you came here to see a show, but we are going on a journey,” said dancer Courtney Cook as the show began.

These scenes included “Hair Hell Moments 1, 2 and 3,” sketches about entering an elevator and having one’s hair being the center of attention, whether for ridicule or praise. Sarah Cochran/Staff Photographer
Tendayi Kuumba (left) and Courtney J. Cook (right) dance, sing, and entertain during their performance of Hair & Other Stories from the Urban Bush Women company on Friday, February 9, 2018 at NC State University’s Stewart Theatre. Urban Bush Women was founded 30 years ago by Jawole Willa Jo Zollar, who was hoping to establish a company that captures the energy of the African-American community and would inspire others.

Stephanie Mas, the sole white dancer, told the audience that the first time she dyed her blonde hair red, her father did not speak to her for a month, noting her Aryan features were always praised as beautiful.

“We need to talk about the N-word,” said dancer and associate director Samantha Speis as she entered from stage left. “I’m gonna say it and you’re gonna say it, so fix your lips–Nappy!”

Crystal Smith, an English professor at UNC Greensboro, said during the intermission, “It was fantastic. I’ve never seen them perform before. The energy from beginning to end was intense and purposeful at the same time. I was surprised at the how they incorporated the audience.”

During the after-party, Wolf Tales, a part of the NCSU Libraries Special Collections Research Center, gave attendees the chance to share their own hair stories to be archived in the library.

The following words appeared on the screen behind the dancers during their last dance: “Life hits you hard. But it takes three seconds to decide if you are a superhero or not. I am.”