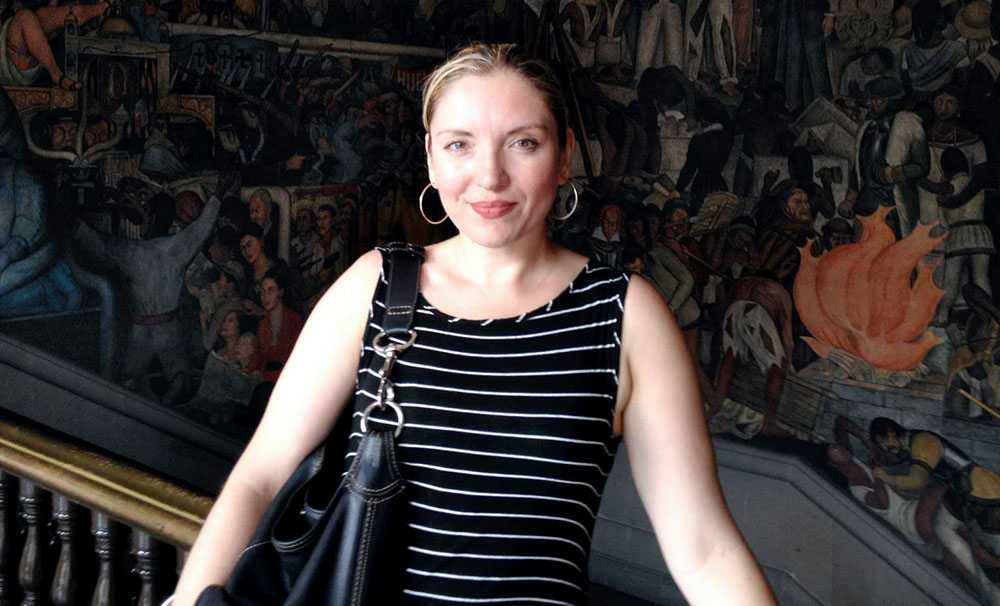 “I grew up on a farm in a poor area that was predominately Latino or Portuguese,” said Dr. Chelsey Juarez, an assistant professor of anthropology. “Most of the people were working class. I certainly didn’t have an idea about the possibilities of life, that you could be something beyond a farmer, attorney, doctor, dentist, or veterinarian. Those were the only choices we knew about.”

Juarez had many supporters, mentors and allies that helped her transition from a small town to University of California, Berkeley, where she earned her bachelor’s degree in anthropology.

“Berkeley and everything they had to offer was a foreign place for so many reasons. I didn’t come from college-going people. It became clear that if I was gonna be retained, I was gonna have to find my familia, my community. And I did find them.”

It wasn’t long before Juarez found Hermanas Unidas, a Latina social group; the Cesar Chavez Student Center at San Francisco University; and other communities for people and students of color.

Juarez attended college during California’s Proposition 209. This ballot proposition, passed by a popular vote in 1996, banned the use of race and sex in public education admissions and was opposed by groups like the American Civil Liberties Union who argued it would end affirmative action practices. Proposition 209 remains in effect today.

“People were questioning our place at the university. There were some major players… as friends, we kept and supported each other because we were in the middle of this struggle, but then there were others like Lupe Gallegos-Diaz from the Cesar Chavez Center or John Matsui from the Biology Scholars Program who did things like make sure I had a place to live.”

In the midst of all the political strife, Juarez stumbled upon forensic anthropology. While she ended up earning her bachelor’s degree in anthropology, she entered college with the dream of becoming a doctor. It was pure coincidence and wise words from a professor that led her to the subject she now teaches.

“When I became an undergrad at Berkeley, even though my mind was being opened to all of these possibilities, I was still kind of stuck on this idea about how I had to become what I was gonna become.”

Everything seemed to be going well until Juarez’s internship at the Berkeley Free Clinic, a nonprofit community clinic that has provided free medical and dental care in Berkeley, CA since 1969.

“It became a place where the working poor and people who were homeless, and just folks in general who had a condition that they needed to be kept secret for whatever reason, would go for help and treatment. Working at the Berkeley Free Clinic, you saw a whole swath of the society and you actually got to do things.”

Juarez and other volunteers were trained as medics and learned how to see patients with issues ranging from upper respiratory infections to STDs.

“I went there having the course part but had never really worked with people in a medical way. It was sort of a life changing experience, because I figured something out about myself that I didn’t know. I didn’t want to see the wounds of people.”

Juarez confided in one of the lead doctors at the Berkeley Free Clinic to which he replied, “What about working with dead people?” She also happened to be taking a seminar on forensic anthropology and grew very close to the professor and fell in love with the subject.

It was these circumstances that made Juarez switch her course of study from biology to anthropology during her junior year.

The woman who taught the anthropology seminar became one of Juarez’s most powerful mentors, writing letters of recommendation for graduate school and calling the professors Juarez applied to work under.

“With her help, I met some of the women who would change my life. She helped me understand that this was a viable career and I could still work with the communities that I wanted to work with, that I could effect change in the Latino community and think about policy. She helped me understand how I could work with the dead but still affect the living, and that was really important for me.”

Juarez continued to find and make community during her graduate studies at the University of California, Santa Cruz.

“I had an advisor and she was British, a white woman from England. And foolishly I thought, ‘man, how is this woman ever gonna help me?’ From her I learned that your allies don’t have to look like you. They just have to believe in you and what you want to do and you have to let them.”

According to Juarez, her PhD mentor, Alison Galloway, said, “I picked you because I could tell from your statements and from the way that people talked about you on the phone that you were gonna think differently. That you were interested in things that these other people were not interested in and you were gonna change the field in a way they never would. I wanted to invest in that legacy.”

Galloway also encouraged Juarez’s efforts to increase diversity and retention of graduate students of color at UC Santa Cruz. All of the mentors who supported Juarez throughout her life inspired her to continue the work of mentoring undergraduate and graduate students.

“After I graduated, I worked there and I mentored students that I still mentor today,” Juarez said. “Most of them are students of color who went off and did all manner of different things that weren’t anthropology. A lot of people helped me and I remember them.”

Juarez is currently the co-director of the Hispanic/Latino Advisory Group, a group of faculty, staff, students and community members whose purpose is to “keep a pulse on the Latino community both at NC State and in the greater area.”

“What I can do while I’m here at NC State is strengthen the bonds between the communities of color and allies. We can learn how to, together, fight the battles that are gonna come for us. Because there’s gonna be a lot.”