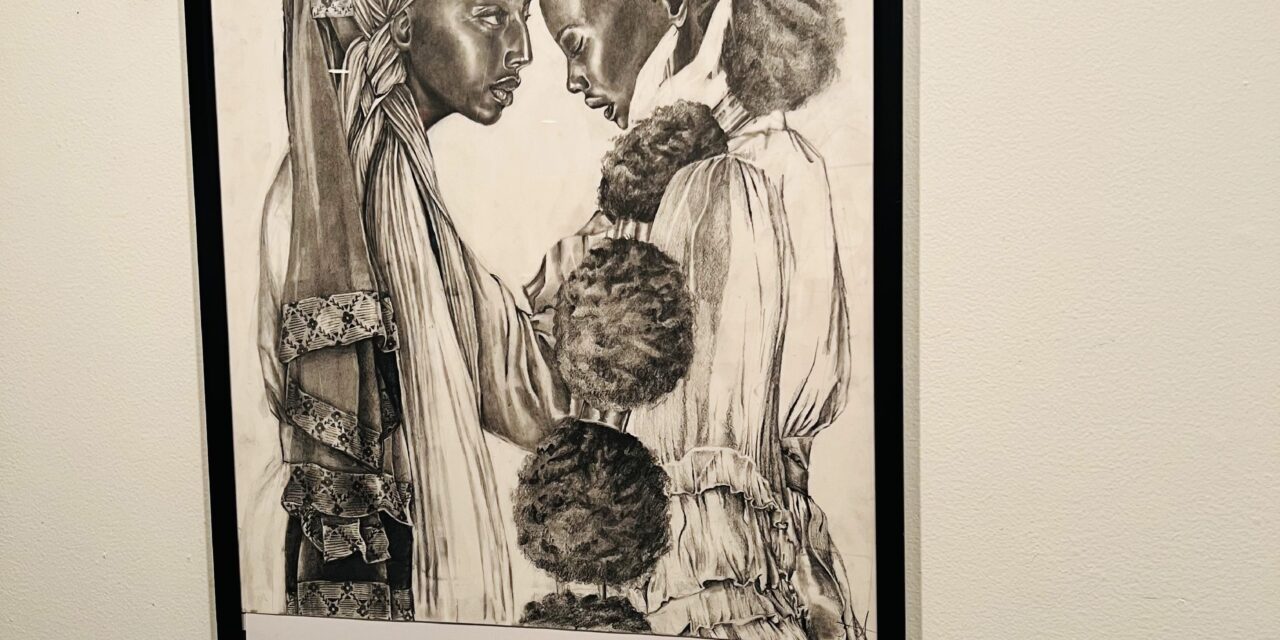 The art exhibit opened with attendees walking around and viewing the art. After the initial viewing, Anderson gave an artist talk in which she answered questions about her art and processes.

The art pieces in Folk Nouveau have a surrealistic style and are based on African American Folklore. There are some common themes in the artwork such as children and birds. Some of the main folktales that served as inspiration for Anderson’s work were Brer Rabbit and Anasi the spider, “I think a lot of what drew me to folklore is that the basis for a lot of these works was this idea that from the moment that Black people were brought into this inhumane system of slavery they were also engaging in creating narratives that were still affirming their worth and creating stories and spirituality and community and changing who was the protagonist.”

Anderson’s artwork is not just based in the world of fiction “It’s autobiographical in a lot of ways, I don’t think I have the expertise to say I’m making any broad sweeping notions about blackness or gender or any of the big concepts. I think a lot of the pieces are about fights I have with my mom or fears I have about my brothers.” Similar to the people who created the folktales she bases her art on, Anderson wants to create her own story: “I think a lot of the story that I am telling is me creating my own identity, my own narrative, centering myself… using folktale as this vehicle as making myself the protagonist.” This point is elevated by the surrealist style of the art. A facet of Surrealism is the combination of the human experience with something mythical or dreamlike. According to Anderson, she is “Using these kinds of creative, imaginative notations of myth, magic, and fairytale to elevate my story to the level that it needs to be told.”

The actual processes that Anderson uses to make her work are also a reflection of herself as they play into her academic background. “I did a lot of research about folklore and African American folklore as I was making these pieces and I kind of used that as the basis to express what I’m feeling at the moment.”

No project is without challenges however, “I think probably the biggest challenge was I decided what I wanted to say as an artist before I started. I was actually saying anything and so I had the end of the story before I had written any other part of it. I had to separate myself from … I think it was difficult but also very enlightening and healing in a lot of ways to let that pressure go of already knowing what the answer is and kind of let the story form as it forms. But it’s difficult because I like having all the answers. ”

Folk Nouveau displays art from many mediums however the prominent one was graphite drawings, “There’s a lot of small detail work and I think that for my process it’s very important because it helps me- I can’t do it quickly- so I think it helps me be really intentional as I am creating a piece and you know it’s one of the few erasable mediums so I can make changes and let the story develop naturally.”

Anderson gave some insight on the specific process of one of her works titled How Boys Break, a graphite drawing featuring two young boys. “That one (How Boys Break) I think is really about the characteristics of  Brer Rabbit which like yes he is cunning and he’s clever and he’s smart but he’s also really crafty and he steals from people like he’s not exactly admirable. I think a lot of what I’ve been kind of contending with is traits that I have had to kind of come up with and that I pass on to other people may be necessary to survive and to move through the world, but they aren’t necessarily admirable, they’re not always the best traits that I want to have.” Again Anderson connects this idea back to her family “So if I’m telling my younger brother to put on his hood when he goes out when I’m telling him to be very aware that he is not being seen as the kid that I know that he is but as this aggressor when he goes out then it might be necessary for survival but it takes something from him.”

The art in itself is very personal for Anderson so it raises the question of what should the audience get out of it? “It’s a cop-out to say but I want you guys to figure it out.” Anderson then shared what she personally gained from her work outside of it being an outlet to express herself “I think it a story that’s important, as I’ve been doing this work I’ve been kind of redefining things in my head about home, identity, resistance, and so one of the things that I’ve with resistance is that I’ve kind of always thought of resistance as planting your feet where you are and refusing to be moved and being where you are and asserting that you are there but I think that is a little bit lacking. I think resistance is that and also that pushing back and a lot of that pushing back is being able to create, imagine, and heal. I think healing is an act of resistance.”

Despite encouraging her audience to make their own ideas about her work and to look into these folktales, according to Anderson she doesn’t seek to inspire, at least not solely through her art, “I don’t know if I’m trying to inspire in the sense that I think these are the stories I think you should look up to. I think what I hope to inspire would be that individual self-work and healing and creating your own narrative and to be able to take ownership in that space that you occupy.”

The folktales, artwork, and Anderson herself all combine to create the experience of Folk Nouveau. She expresses that if a viewer were to look at one of the art pieces only thinking about one of these elements they could still enjoy it but they lose the bigger picture. Understanding the folktales and how they are used in tandem with Anderson’s own personal experiences and growth adds a new layer to the artwork. Through retelling these folktales Anderson makes herself and the subjects of her art the protagonist of their own story while encouraging her viewers to do the same. 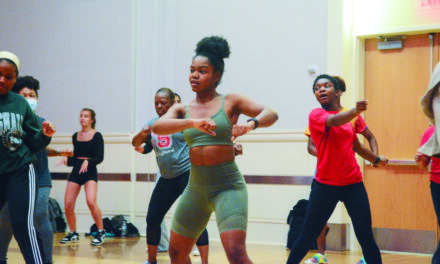 Soul and Salsa Zumba for All!

Is The Struggle Really Over? @Ask A Black Guy