Everything you need to know about #ENDSARS 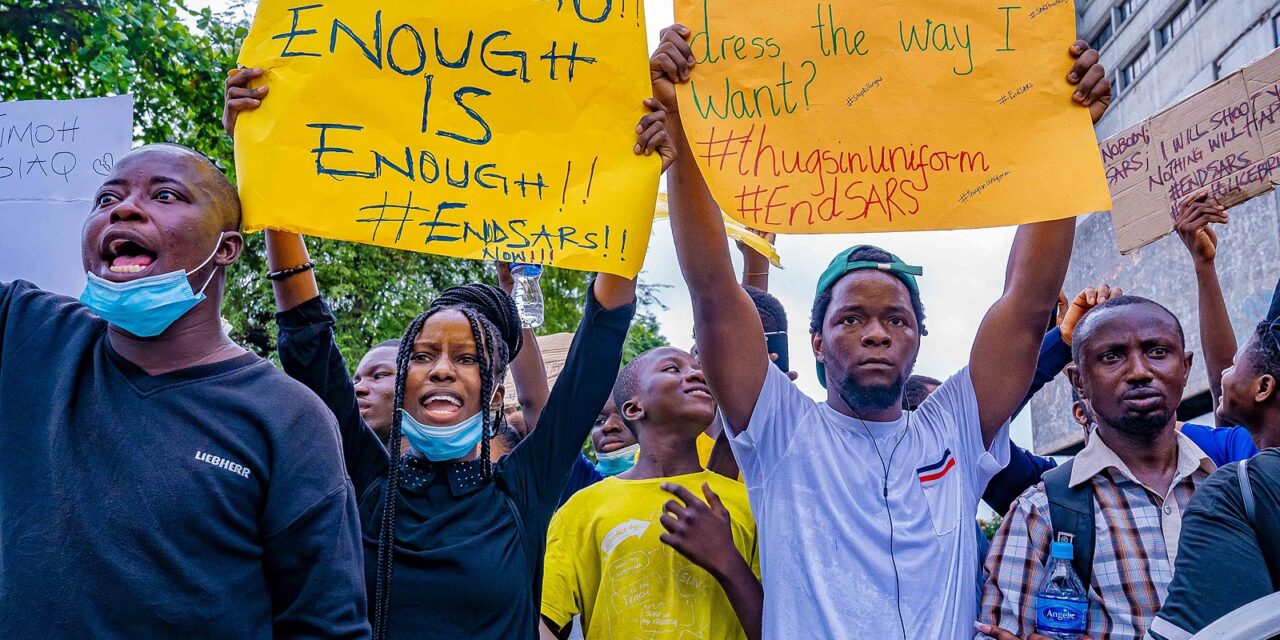 For over one-week #ENDSARS has been trending on social media. Thousands have been protesting. Hundreds have been injured. Many have been killed as Nigerians call for the government to #ENDSARS.

#SWIPE : During the BLM Protests in America, we reported on Nigerians protesting in the streets on our behalf. There is power in unity and we are not free until we are free EVERYWHERE. Nigeria keep applying the pressure. Take down more than just SARS. The entire system needs to be uprooted and NOW is the time! If you stand with #Nigeria drop the flag in the comments! 🇳🇬 🙌🏽✊🏿 #naijanodeycarrylast🇳🇬

The Special Anti-Robbery Squad, known as SARS, is a sector of Nigeria’s federal police department, was founded in 1992 by Simeon Danladi Midenda. It was created to protect citizens but instead has terrorized Nigeria’s youth. It is openly known that SARS participates in illegal activities yet Nigeria’s government turns a blind eye.

Civilians are often stopped because they are profiled by SARS officers. Anyone who was considered well to do- meaning having a nice car, a nice phone, or a laptop- or those with locs, piercings and tattoos were targets for police brutality. As SARS officers automatically assumed they acquired their money through criminal acts.

Many citizens have come forward to tell their experiences at the hands of SARS. Horrifying testimonials of citizens children, brothers, sisters, nieces, nephews and more who have beaten, assaulted, murdered and gone missing. 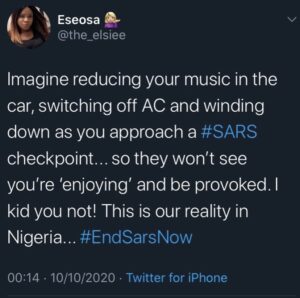 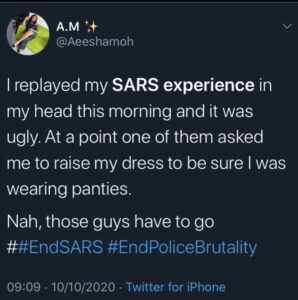 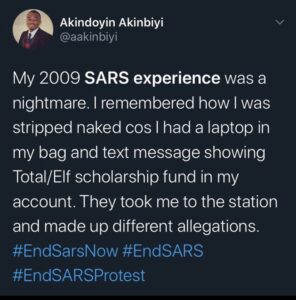 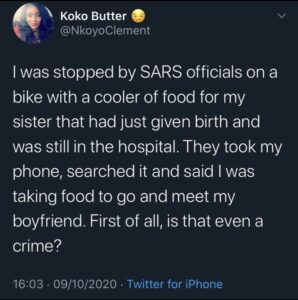 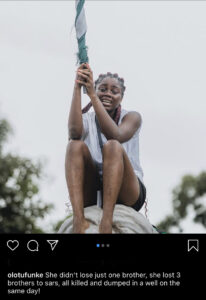 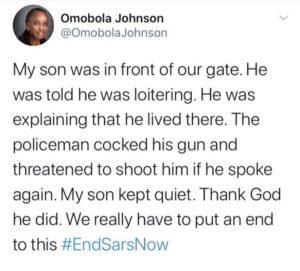 According to a report in June by Amnesty International, between January 2017 and May 2020, there were at least 82 cases of torture, ill-treatment and extra-judicial execution by Sars. And these are just the cases that were acknowledged. Many of SARS’ crimes have been swept under the rug.

In a September 2016 report distributed by Amnesty International, it was disclosed that SARS officers were using extensive torture methods and detained citizens without a trial. SARS also forced confessions, withheld food from detainees, forced detainees to make several withdrawals from their personal bank accounts and so much more.

This is why thousands of people in Nigeria have been protesting to #ENDSARS. Protestors are still being arrested and detained for exercising their right to protest.

On Monday, October 12th, Nigeria’s President Muhammadu Buhari acknowledged the protest and #ENDSARS for the first time after one week of protest. This was done through a video on Twitter and stated that SARS will be disbanded.

It was also stated that the officers in SARS would be dispersed into already existing departments and that some would be deployed to a new department called Special Weapons and Tactics (SWAT).

Many Nigerians were dissatisfied with this response as it is not the first time they have fought to end SARS. In 2017 after a video of SARS killing a boy went viral, Nigerians took to the streets and protested. Nigerians were told by the Senate that SARS would be disbanded but in 2018 the acting president Yemi Osinbajo, Buhari’s Vice President, ordered for SARS to be reformed and reinstituted.

Due to previously receiving false hopes from the government, Nigerians have decided to continue to protest until ALL of their demands have been met.

*  On September 16, 2020, President Muhammadu Buhari signed a new Nigeria Police Bill that repealed the Police Act Cap P19 Laws of the Federation from 2004. This new bill  promises  for a more effective and well organised police force “driven by the principles of transparency and accountability in its operations and management of its resources.”

With the instructions of President Buhari, the Presidential Panel on Police Reforms agreed to the demands. But Nigerian’s are still not satisfied as they have had to deal with empty promises for years.

Many celebrities have taken to social media to publicly show support for #ENDSARS including Trey Songz and Drake, and Lil Baby. Many Nigerian celebrities such as John Boyega, Tiwa Savage, Wizkid, Falz, Burna Boy have been at the forefront of protest. Some have even helped organize protests.

While Nigerians have recently taken to calling for the abolition of SARS, it is not new information that Nigerians do not believe in their police system. Nigeria’s police forces were rated the worst in the world in 2016 according to the World Internal Security and Police Index (WISPI). These feelings hold true based on recent polls in the Washington Post, Majority of Nigerians blame the police and government for its high rates of human rights violations.

The police force is a running joke in Nigeria as rates of corruption are high, According to the Control of Corruption indicator, 81 percent of Nigerian respondents to the Global Corruption Barometer admitted to paying a bribe to a police officer in the last year.  Also, only 0.06 percent of thefts were reported to police as citizens did not believe their police force would take action to help them.

With all of this said Nigeria’s are asking for support in any way possible.

1.They are asking everyone to sign the petitions created:

2. They are asking everyone to donate what they can to funds that are supporting the protestors:

3. They are asking for everyone to Break the Internet

They would like everyone to keep posting on social media. Retweeting, reposting, engaging, and sharing content in support of #ENDSARS. Making sure that #ENDSARS keeps trending.

Many have found different ways to support in any way possible. There have been protests in New York & Houston. Many Instagram comedians have switched from their typical funny skits to reenacting experiences with SARS to bring awareness.

. . I’ve been a victim of SARS brutality way too many times in this country and for what? Being a good looking young man that dresses well… isn’t that madness?? These men don’t serve us rather they brutalize and traumatize us constantly without fear. Nobody talks about the PTSDS we have talk less of the deaths. THIS IS MUST STOP! We must win this fight against their brutality and injustice! Kudos to everyone out there protesting and everyone online tweeting and posting. Please do not stop! Do whatever you can to lend a voice! #EndSARS #endpolicebrutality #endsarsbrutality 🇳🇬 🇳🇬

Nigerians are asking that everyone all over the world help spread awareness for their cause no matter your race, ethnicity, religion, or gender. Nigerians will need all the support they can get especially since there are now speculations that Nigeria may shut down the internet. This would not be the first time a country has shut down the internet in order to mute a campaign. 2 years ago Chad shut down the internet even though it was an infringement of their citizens’ digital rights.

#ENDSARS is a part of Black Lives Matter so it’s important that everyone who supported the Blacks Lives Matter movement supports #ENDSARS.

Black and Blu: Don’t Let it Happen to You

President to Visit the Triangle Tomorrow