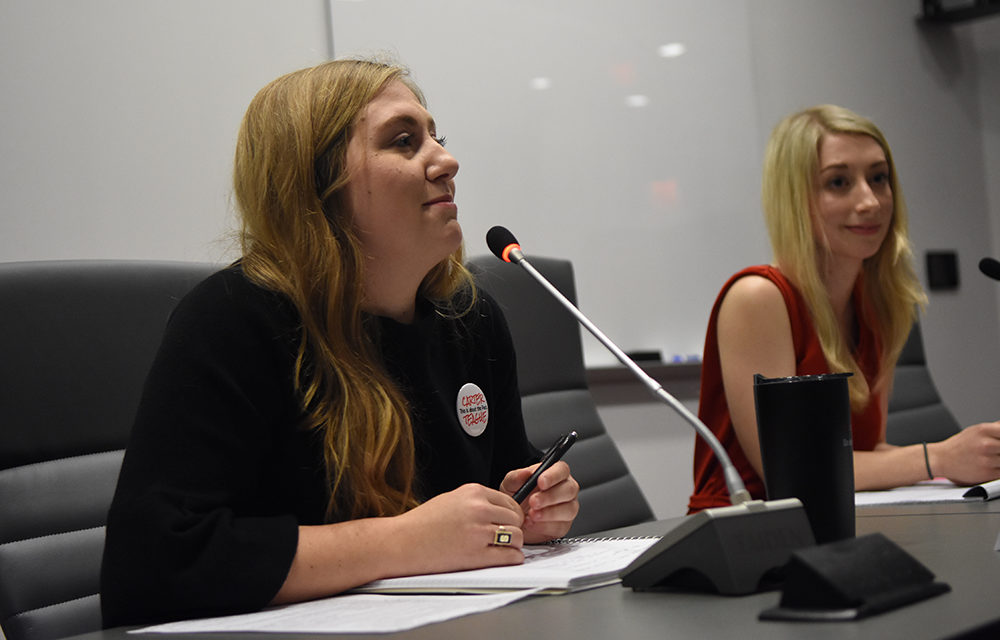 When asked what they believe to be the biggest challenge SG faces, the vice-presidential candidates held different beliefs.

“Students aren’t always aware of what SG is doing, is capable of doing and not capable of doing,” Malico said. “I think it’s important for us to show students these things.”

Teague believed the biggest challenge moving forward is the SG’s relationship with the NC State administration.

“Fixing the relationship with administration would be beneficial in the long run,” Teague said. “The administration is a stellar resource and we should be promoting more collaboration between them and Student Government.”

When asked about some policies she hopes to implement into campus policies, Teague briefly referred to the Trans-Inclusive Syllabi Clause. The clause protects transgender persons from persecution and emphasizes the importance of pronouns.

“Every human should be accounted for,” said Teague. “Trans students have the right to be addressed by their proper pronouns.”

The clause would not only affect students, but staff members as well.

When asked about one of her initiatives, Malico elaborated her Grad Student Bill of Rights. “As a grad student, I can confirm that we do not get paid a living wage. Some have to pick between eating and paying the electric bill,” said Malico.

The bill would include a maximum 60-hour work week, the right to switch advisors without prejudice, a clear description of a graduate student’s role on campus, and other policies that would address problems many grad students face.

The presidential candidate debate consisted of questions addressing sexual assault on campus, accessibility on campus and diversity on campus.

The first question asked the candidates what steps they would take to combat sexual assault on campus.

“The first step is stopping the stigma of sexual assault. We need to address why it happens and who it happens to,” Obiol said.

“Our first step would definitely be education,” Carter said. “We can achieve this by hosting events that address this problem and increase the amount of offered perspectives.”

When asked how they both planned on addressing accessibility on campus, both focused on different aspects of accessibility.

Carter centered her answer around the issues facing physical/mobile accessibility. “We will host town halls and workshops to address this issue,” said Carter.

When asked to name one point from their opponent’s platform that they disagree with, the candidates touched on the way their opponent plans to address the issues within SG.

“My opponent’s platform focuses on direct departments,” Carter said, “What will be done externally outside of these departments? How will they increase student involvement?”

“I don’t believe my opponent’s platform focuses enough on these departments. The specificity in each department is how cabinet is run,” Obiol said. “There are these broad ideas, but she doesn’t specify who is going to do what.”

For their closing statements, Carter reminded the audience that her platform is for the Pack. This includes accessibility, inclusion, collaboration, allyship and sustainability. Obiol wanted the audience to know that she has been advocating for students since the beginning of her tenure in SG.