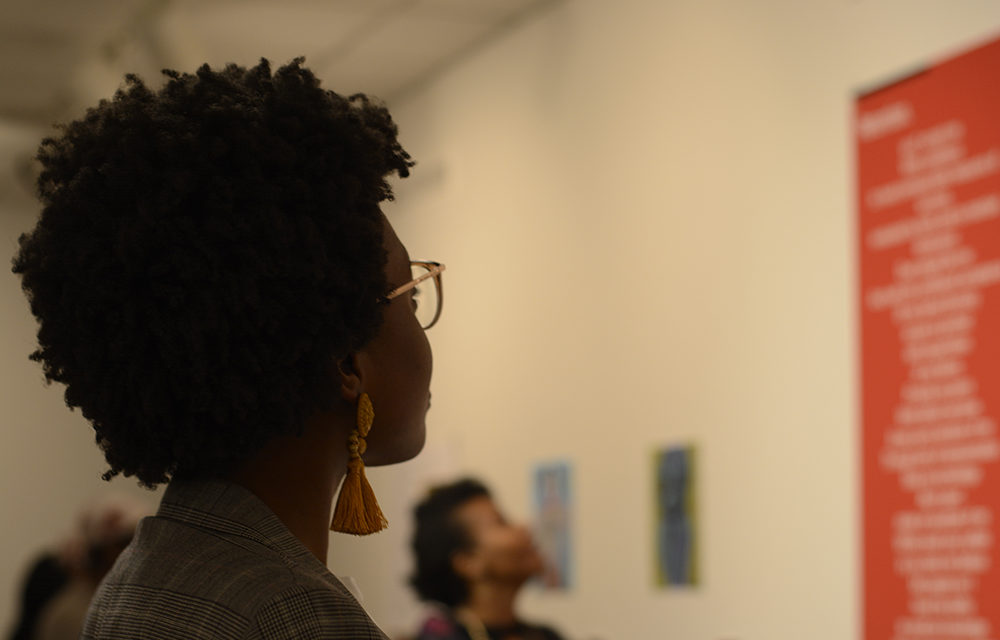 Swathi Karthik/Nubian Message
Serenity Hargrove looks at one of the pieces on display at the Politicization & Sexualization of Black Bodies art exhibit.

The opening of “The Politicization and Sexualization of Black Bodies” exhibition was held on Feb. 11 in Witherspoon Student Center. The exhibition features the artistic works of NC State students, faculty and staff that tell their counternarratives and experiences of self-image and acceptance within higher education and historically white institutions.

Angela Gay, assistant director of the Women’s Center, said, “I wanted to have an exhibit that focused on how we tell those stories and how we reclaim our bodies ourselves. This is a reclamation, a celebration and storytelling. Speaking truth to power through art.”

The exhibition emerged from a partnership between the Women’s Center and the African American Cultural Center (AACC).

The opening reception took place in the AACC and included a reading of Audre Lorde’s “Need.” Then came a reflection by Zakiya Covington, student program assistant of the Women’s Center.

“As a black woman in academia,” Covington said, “to know that the standards I’m held to are inherently connected to the physical body that is present in the room has been a challenge that I’m refusing to accept. My body is not and should not be seen as a limitation, nor should it be used as a justification for any decisions I have made or any decisions, conclusions or comments made about me myself.”

The reception concluded with a keynote by “Mama” Toni Thorpe, former program coordinator and lasting mentor of the AACC, in which she recounted her experiences with beauty, discussed the harmful stereotype of the Strong Black Woman and informed the audience of the importance of positive thinking and telling their own stories.

“What if you were born a wolf and said, ‘Well, I didn’t want to huff and puff,’” Thorpe said, “then the story ain’t so funny anymore. The same thing happens with the stories about beauty. ‘You can’t wear that. That doesn’t look right on you. This is for me, not for you.’ You’d think it wouldn’t hurt, unless you’re the one the ‘ain’t’ goes with.

“So what is a wolf to do?… You got to write your own story.”

Attendees went to the AACC Gallery where the visual and written works are displayed. Much of the art was created in Fall 2018 by participants of the painting and writing workshops led by local artist and DJ Gemynii.

One participant is Kahlia Phillips, a fourth-year studying accounting and student program assistant of the Women’s Center. She created “Sheila in Fishnets,” which tells of her relationship to her own body in light of ideal standards of beauty and gender expression.

“We had a lot of time for self-reflection to write our counternarratives, because we were supposed to be thinking about how our bodies are viewed by society and what we’ve been told,” Phillips said. “We were supposed to be writing the counter story to that and telling real life experiences and truths.”

Phillips continued: “For me, it’s about not assuming the same thing for every black woman and recognizing holistic differences between us all. Even though we may have similar experiences, we’re all very different in our own ways. That, too, should be appreciated.”

“What I want people to take away from this event is that your narrative is your own and it’s no one’s right to try to share it or write it for you,” Parker said. “I want people to be able to write their own stories as a result of this.”

Chaniqua Simpson, graduate assistant of the Women’s Center and a doctoral candidate in sociology, created “perfectmemory” in which she painted her own body from memory. The accompanying placard reads, “it’s perfect. perfect as in an accurate representation. not perfect like white, skinny, tall, pale, middle class. my memory is perfect. my body is perfect.”

“I Am Man Enough” by Shaw Fredericks*, a third-year studying international studies, offers his counternarrative against the expectations about masculinity in a written piece.

Fredericks said, “I thought about the narratives made about me as a black man. I wanted to write something that spoke to my truth and broke down some of the narratives surrounding my intersection.”

Adrianna Moore, a fourth-year studying women and gender studies and intern at the Women’s Center, said, “I want people to read my story and feel empowered to tell their own stories. I want people to see it and know they’re not alone in some things. Even if they don’t feel like they connect with my story at all, I want some kind of self-reflection.”

Among the attendees was Quentella Williams, who came in support of Angela and the exhibition. “It really touched some things inside me as being a black woman… I feel as though in a country where race is a really big issue nowadays, this is something that’s needed for our young brothers and sisters, to know they have a voice.”