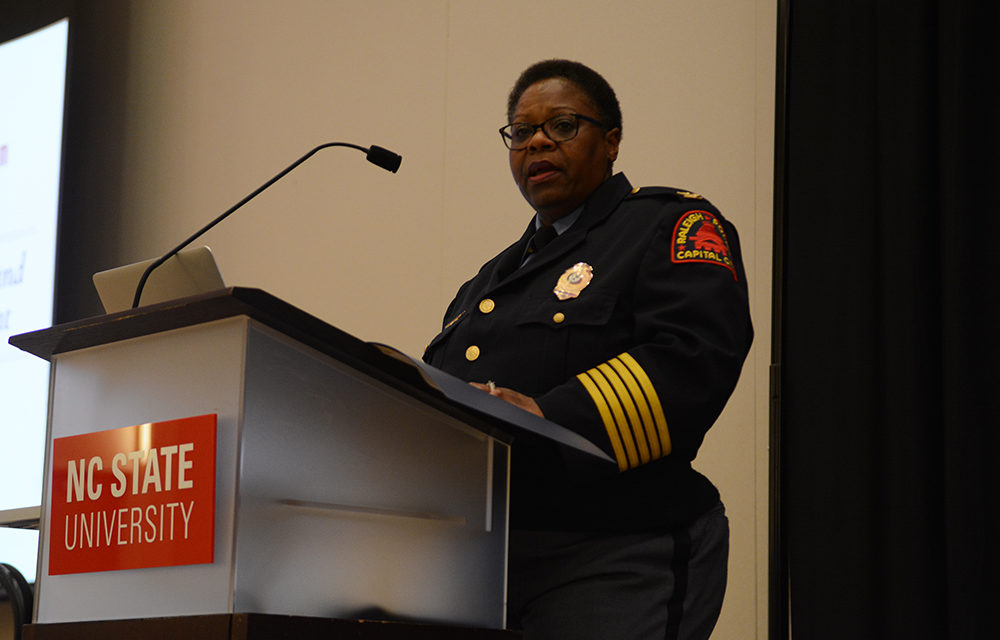 Sara Trudan/Nubian Message
Chief Cassandra Deck-Brown came to Talley Student Union at NC State Feb. 7 to give the 2019 Humanities and Social Sciences Diversity Lecture on the importance of Diversity and Inclusion in Law Enforcement.

On Feb. 7, Police Chief Cassandra Deck-Brown delivered the College of Humanities and Social Sciences spring 2019 diversity lecture on the importance of diversity and inclusion within law enforcement.

Graduating from East Carolina University in 1987 with a degree in criminal justice, Deck-Brown joined the Raleigh Police Department (RPD) with the intent to help better serve her new community. While in Raleigh, she would go on to earn her master’s degree in public administration from NC State.

In her speech, Deck-Brown addressed just how impactful it is for police to be trusted by the community in order for them to effectively serve the community. She explained how incorporating diversity and inclusion can help cultivate that trust.

“Law enforcement must not only look like the people we serve, but we must be as open, inviting, inclusive and welcoming of those we serve,” Deck-Brown said.

One of the problems with cultivating trust between citizens and the police department is the national climate regarding law enforcement. With so much information coming out about police misconduct, it can be tough for members of the community to look past these grievances. Deck-Brown addressed this tendency for citizens to be skeptics of officers like herself.

“To stereotype a cop is just as bad to stereotype someone for their race,” Deck-Brown said. “We live in a world where social media tells the story whether or not it is right or wrong. And sometimes it just tells the last 30 seconds of a 7-10 minute clip and that decides the conclusion of the whole story.”

Deck-Brown also discussed the tough duality of her life being both a law enforcement officer and a person of color.

“As a black parent, I’ve had to talk with my son [about the dangers of law enforcement] and many have. But they are also taught to respect law enforcement,” she said. “The role of the black female in law enforcement has not always been very common. I recognize that when I stand here as police chief, I stand on the shoulders of many that supported me.”

Deck-Brown finished her speech with a call to prioritize inclusion over diversity within the police force, and broader workforce in general, by answering a question she began the speech with: Who would you bring with you to a gala: diversity or inclusion?

“Inclusion would be my honored guest,” Deck-Brown said. “If diversity comes along with its race, gender and culture, it only proves to make the gala more diverse. It may choose to not engage and only be a wallflower. However, when inclusion arrives, the tone has already been set. The mood will change because inclusion will be embraced at the door and immediately will never have the opportunity to be a wallflower.”

Noor Shehata, a first-year studying political science, attended the lecture because of her interest in criminal justice and how many stories of police violence have surfaced within national news.

“A personal fear of mine is being pulled over by a police officer and getting into a misunderstanding,” Shehata said, “so when I came here, I wanted to get the perspective of officers and the police chief. It felt nice to have her as a black woman be in a position to deal with officers that do not comply with bias training.”