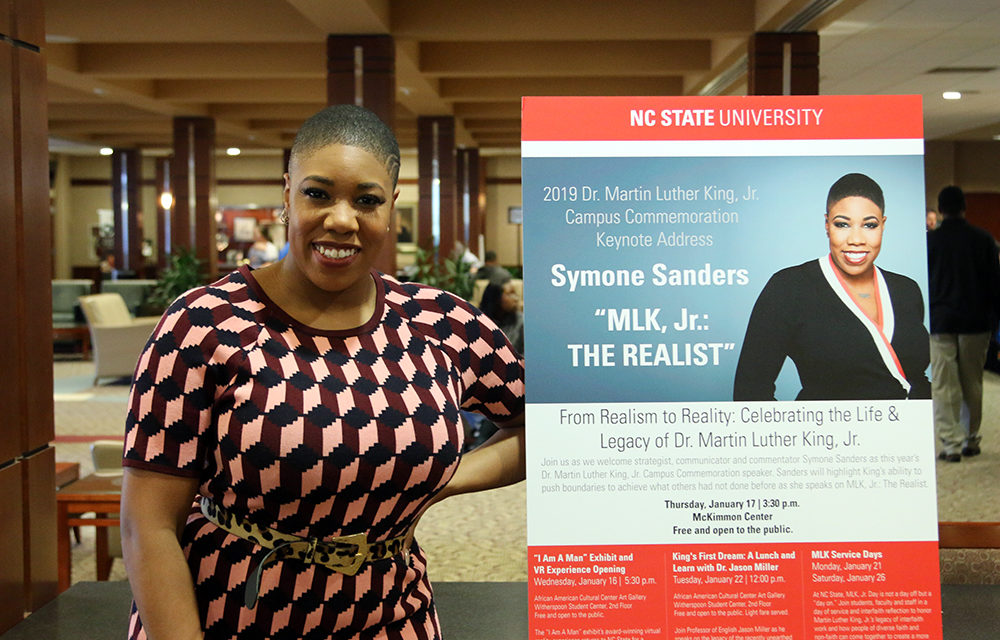 Nubian Message sat with Symone Sanders, the 2019 MLK Commemoration speaker, to talk politics, her path to success and what it means to be an effective politician.

Nubian Message: Did you always want to be a political strategist? What was your ideal career going into as a child and college?*

Symone Sanders: I used to want to be a judge or a politician, because I thought those were the two most powerful things a person could be in the world. Politicians make the laws that govern people’s lives, and judges literally hold folk’s lives in their hands. I didn’t know that being a “strategist” was an option, but I got involved in politics when I was in college…

I saw that sometimes the messages weren’t connecting to people that looked like me—whether that means young people, black people, women—because we weren’t involved in creating the messaging, so I always want to be the person that’s in charge of or that has a hand in the messaging.

NM: How did the limelight change for you after Bernie’s campaign?

Sanders: I guess one could argue that I didn’t have a limelight before the campaign… I guess the difference is people recognize me, I can rarely go somewhere where someone doesn’t come up to me, whether I’m out at dinner or at the hookah bar or at the airport. I think that’s the biggest thing that has changed because I’m on TV a lot…

I was in L.A. the other day, and I was at dinner I was sitting at a restaurant. My chair is facing the door and in walks Lionel Richie. Lionel Richie looks at me and I look at him and I’m like, “Hey!” And he was like, “How are you?” After he walked away, everybody at the table was like, “Do you know Lionel Richie?” and I was like, “No, he watches me on TV.”

But it was great because I knew who Lionel Richie was, okay? I found it interesting that he knew who I was and he was like, “Can you hear me when I’m yelling through the TV?” and I said, “No, but I can feel your pain sometimes”.

NM: Is that scary sometimes?

Sanders: It’s not scary… I think I’m fortunate to have the ability to sit on panels where thousands—I know Jeff Zucker hopes millions—of people are watching to discuss the news of the day and to contribute to the conversation. I think I’m very fortunate and very blessed to be able to do that.

I think that comes with a responsibility, and it’s my job to be both actual and factual, and that I’m keeping the bar high and substantive—particularly now because we’re discussing issues of humanity.

I would love nothing more than to just talk about marginal tax rates, and what’s better, do we tax the top one tenth of one percent of people at 70 or 80 percent… but those are oftentimes not the conversations we’re having. We’re having conversations about issues of humanity.

NM: What does it mean to have political power? What makes someone an important political figure?

Sanders: I think it’s more about being effective rather than being important. Changing actual policy…

When it comes to politics, that’s what makes someone effective. Someone who can move hearts and minds of people, that can galvanize folks to act. That to me is effective, and some may see that as being important, but I think there are a lot of important people who aren’t effective. So they aren’t exactly synonymous.

NM: What do you feel like your purpose is?

Sanders: …[I] used to always say when I grew up, that I wanted to help enact change in my local and national community. So I really do feel like that really is my purpose. Someone once told me that that is too grandiose and vague, but it’s not grandiose in my opinion, nor is it vague. I think it’s very specific.

I would like to exact change. What kind of change? Well, it depends on what we’re talking about. I think that’s my purpose… to not only contribute to conversation, but to contribute to change, to move the needle.

*Editor’s Note:These questions were reformatted for readability and clarity and maintain the initial message.