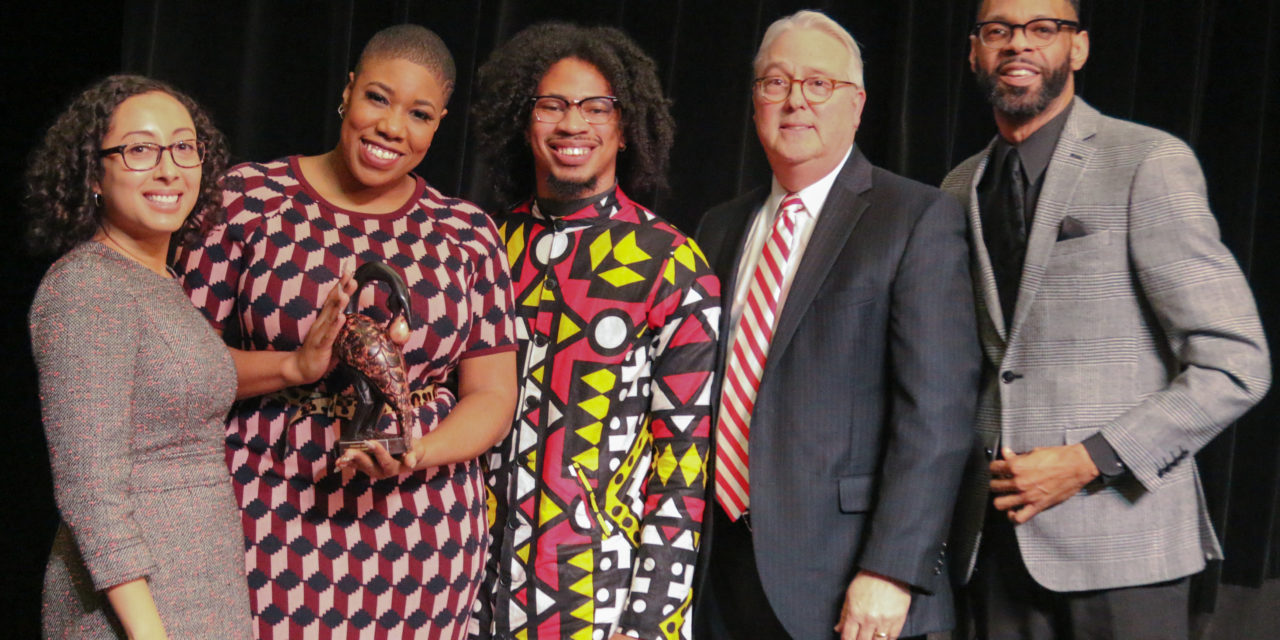 “I like to think of Dr. King as a radical revolutionary,” Sanders said. “Before Dr. King was someone that literally changed the course of history, he was just a 26-year-old preacher who moved to Montgomery, Alabama, saw some things weren’t right, and decided to something about it. He decided to act.”

Sanders defined the criteria for being a radical revolution—the first being a person who is willing to “bump the status quo, take risks, and be uncomfortable,” just as King did.

“Far too many of us are not willing to be uncomfortable,” Sanders said. “I am here to tell that if you go into places and spaces every day claiming you do the work of equity, social justice, racial justice or environmental justice… if you’re not feeling uncomfortable, I’m telling you, you’re not really working.”

Radical revolutionaries also “stand in the gap for other people,” said Sanders. She addressed how King’s movement was exclusive to the rights of black and white men while leaving out rights for women and the LGBTQ+ community, despite both groups’ contributions to that movement.

“You don’t have to wonder how you might creatively and innovatively stand on the side of freedom and justice. You can act. Right now.”

“When I talk about being a radical revolutionary,” Sanders said, “it’s also about taking stock of who we aren’t including, or who we’re intentionally or unintentionally locking out of the process.”

The final criteria of a radical revolutionary was to do what’s not been done. Sanders highlighted how Dr. King’s peaceful protests were an unconventional and successful strategy.

According to Sanders, by getting black people to organize and taking those protests into the media, King was drawing the attention of northern white people to the mistreatment of southern black people. That strategy garnered much support from those northerners.

“Dr. King’s dream was not just that we’d all be about to sit at the lunch counter and buy a hamburger,” said Sanders. “His dream was that everyone would have the ability to own the establishment, and that’s not a dream we have not yet realized.”

Sanders referenced an NBC interview with Dr. King in 1967 where he talked about the “new phase” of civil rights, shifting the focus from equality among American people, to equity.

Sanders emphasized that today, there is still a need for radical revolutionaries.

“You don’t have to wonder what you would do then [during the Civil Rights Movement], if you were challenged by your government, your state or the state of affairs,” Sanders said. “I think we have the opportunity to act right now.” Sanders continued: “You don’t have to wonder how you might creatively and innovatively stand on the side of freedom and justice. You can act. Right now.”

After concluding her speech with the poem “Things That Haven’t Been Done Before” by Edgar Guest, Sanders answered questions from the audience. Following the Q&A session, the African American Cultural Center and NC State gifted Sanders a sankofa statue. AACC Director Moses T. Alexander Greene said the statue symbolizes reaching back into history to “remember that which you’ve forgotten.”

Among those in attendance to Sanders speech were Katherine Bublitz, a first-year studying business, and Kendall Zorn, a first-year engineering student. They attended the speech to fulfill a requirement of the Honors and Scholars Village program, and were taken by Sanders’ call to being activists and making change today.

“That always lingers in the back of my mind,” Zorn said, “for her to point that out was very inspirational and eye-opening. It solidified that there is so much to be done now.”

Bublitz was also inspired “when [Symone Sanders] closed her speech with the poem and reinforced that there are paths we still need to go down, that we still need to keep going out into the world and keep moving forward with what we’re doing.”

Sydney Deloatch, a first-year engineering student, said, “I wanted to come because it was a black female, and I needed to go see someone who looks like me, and see where she is, the way she moves in the world.”

“[The event] definitely should have been on main campus,” Deloatch said, “because I know a lot of my friends would have came if it was on main campus.”

Jennifer Hartwell, the associate director of Women and Minority Engineering Programs, encouraged her students to attend Sanders speech and expressed that faculty and staff members should attend events like these as well.

Hartwell said, “Part of the advantage of being at such a big university is the access to speakers that you don’t necessarily get to see or hear. No matter your belief system, you get this incredible opportunity. It’s important to take advantage of those opportunities every time. That’s how you expand your worldview… It’s equally important that we [faculty and staff] be in the room as much as we ask our students to be in the room.”