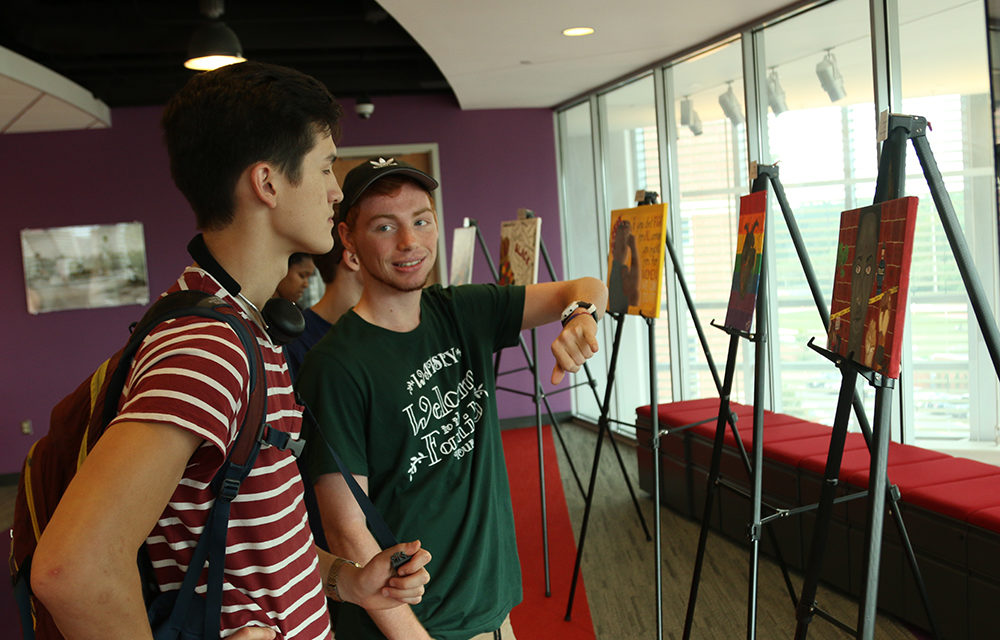 “I come to art from a place of believing in the power of agitational propaganda,” said Q Wideman, a fourth-year studying art and design, explaining the inspiration for their art. “Pretty much everything out there that’s visual and that is art is pushing some agenda. There’s no such thing as political neutrality.”

Wideman, along with Joanna Ali and Nieya Garland, was featured in the student art showcase “My Art is Resistance” co-organized by the GLBT Center and Student Involvement.

“As part of GLBT History Month—the theme this year was ‘Strategic Activism: Fighting on All Fronts’—I wanted to let people know that there’s different ways of resisting, of embodying activism and advocacy,” said Preston Keith, assistant director of the GLBT Center. “A lot of times people think of direct action or organizing but don’t think of the other tool that people can utilize like workshops, teach-ins, art, and other mediums.”

Most of Wideman’s art reflects specific political moments experienced and struggles they’ve been active in. Two pieces draw attention to the prison industrial complex and incarceration. The first depicts a woman of color in an orange jumpsuit with arms above her head breaking the chains between her handcuffs. The second is a memorial to Uniece Fennell, a 17-year-old who killed herself while awaiting trial in Durham County Jail.

“Prison and prison abolitionism is a big part of how I came into the movement and where a lot of my politics come from,” Wideman said. Their uncle is in his 50s and has been incarcerated since he was 17.

“Also growing up my mom was mentally ill and I saw a lot of really horrible interactions between her and the police,” Wideman said. “The police and these carceral mental health institutions, and the fact that prisons are such a big part of the mental health system in the US—that really influenced me.”

Ali, a graduate student studying educational psychology, said that she wants her art to be a place that conversations and dialogue can start.

“A lot of times my students’ artwork was used as starting point for that dialogue, and with visual images there’s usually something emotional that will elicit a deeper conversation than just having a conversation about something that is taboo like racism or any type of inequalities,” Ali said.

All of Ali’s featured work incorporated images of her children and merged contemporary and historical elements. A piece entitled “Field of Dreams” depicts a child standing in a field of cotton, juxtaposing the innocence of childhood with the harsh reality of chattel slavery.

“Being a mother of three biracial children who are black males and also Latino, a lot of these things are personal issues for me,” Ali said.

Garland, a first-year studying chemistry, said she likes to focus on representation in her work.

“As an African American, we are represented in society but not always in positive views,” Garland said. “The same with women in general. I have four brothers so they really inspired the little black boy in America. You know it’s scary when you don’t know if your brothers’ are gonna come home.”

The piece Garland’s referring to is entitled “This Is America.” It depicts a young boy with tears streaming down his face and the American flag reflected in his eyes. Behind him is a brick wall with bullet holes and names like Trayon Martin, Michael Brown, Freddie Gray, Walter Scott, Philando Castile and Tamir Rice. The wall also depicts a faceless, white police officer in riot gear; a faceless, multiracial group of protesters with t-shirts and signs that say “Justice” and “Black Lives Matter”; and the silhouette of two lynched bodies hanging from a tree.

Attendees were deeply moved by all the pieces on display.

“It really excited me to see social justice in art on campus in a supported space. I think it’s really important that we have that,” said Ben Schwarz, a first-year in exploratory studies. “There’s a piece about black lives matter with the American flag in their irises… Just to see all the names, that one gave me chills, made me actually feel physical emotion just standing there.”

Schwarz also hopes that more people could hear about events like this.

The GLBT Center is collaborating with the African American Cultural Center to host the exhibit “Artivism: Activism Through Art” in the AACC Gallery, which will feature local artists Gemynii and Jade Wilson. An opening reception will be held Wednesday, Oct. 17 at 6 p.m.

See the full gallery from the My Art is Resistance opening reception.