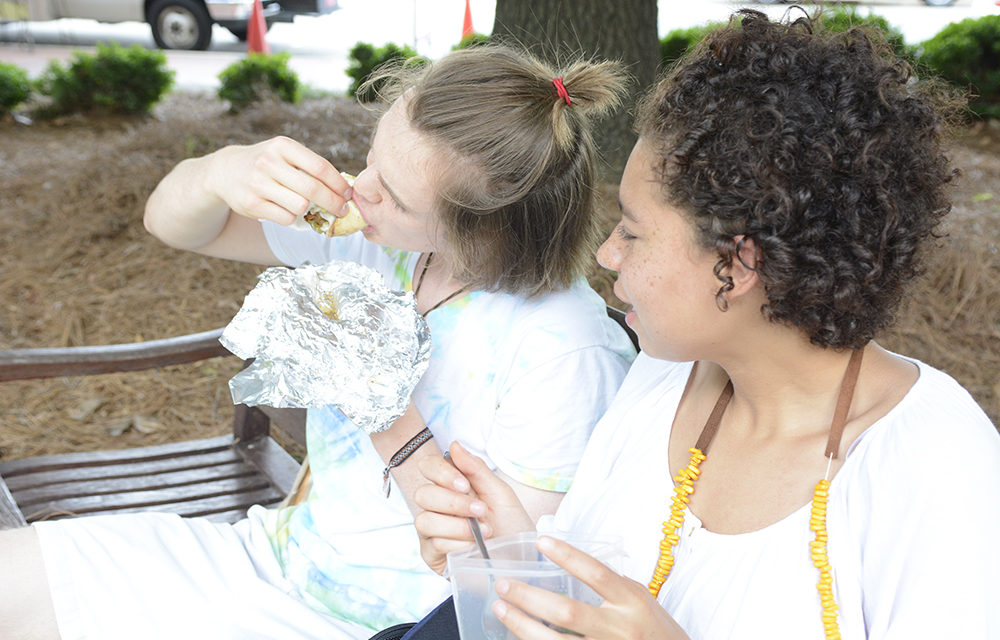 If you’re like most college students, you love to eat. But as an incoming first-year, it’s easy to fall into the habit of eating at the same place every day. It can get overwhelming to choose where to go, especially when NC State has over 40 dining locations. To get you started on your food odyssey across campus, here’s some pointers and insight about NC State dining options from your peers.

Fountain, Clark and Case Dining Halls are the three all you-can-eat buffet-style places. They are open for breakfast, lunch and dinner every day during the semester with changing menus. Because they’re all on main campus, they’re close to the first-year residence halls.

Larden Garland, a first-year studying engineering who was on campus over the summer, usually eats at the dining halls. “I like different variety options and not having to eat the same things all the time,” Garland said. “I like that I can go get a burger and then have waffles somewhere else.”

It’s important to consider dietary restrictions and food allergies when deciding where to eat. Students can check the online menus to see what food is being served. The dining halls offer several dietary options like vegetarian, vegan and halal. Garland herself is vegetarian and usually eats pastas and salads at Fountain. She also notes the variety of food that was available at summer orientation.

From time to time, Garland enjoys a scoop of Howling Cow ice cream, NC State’s own brand produced on campus from Raleigh cows. Her go-to flavor is cookie dough. If you have a sweet tooth to satisfy, Howling Cow can be found at the campus libraries and C-Stores, campus convenience stores in residence halls and Talley Student Union.

Talley’s collection of restaurants makes it a hub of student activity. Between Red Sky Pizza Company, Tuffy’s Dinner, Jason’s Deli, Los Lobos and One Earth World Cuisine, the main floor of the Talley is often packed with students grabbing a bite to eat between classes.

Courtney Wiley, a second-year studying materials science engineering, says she finds herself drinking more coffee since starting college and enjoys Frappuccino from the Starbucks in the bottom floor of Talley. If you need another place to get a caffeine fix, Port City Java has many locations around campus. This was Wiley’s survival strategy for 8 a.m. classes: going to Port City Java each morning and getting a coffee and a breakfast sandwich to eat during lecture.

Wiley tried to be vegetarian during her first year at NC State but found the available options in the campus dining halls lacking. “It was a lot of starchy foods: pasta, bread, potatoes. I had to be picky at where I ate,” Wiley said. The 1887 Bistro, a full-service restaurant on the third floor of Talley, was one of her favorite places to eat on campus, but the changing menu made keeping up with dietary restrictions difficult. Instead, she went to Los Lobos, the Mexican grill on the first floor, where she had more control of what went into her food.

Wiley also advertises the options on Centennial Campus. On the Oval is the food court on the lower level of Wolf Ridge Apartments. Cold Fusion Salads and Deli, Fahrenheit Pizza, Newton’s Grill, Gravity Cafe and Flashpoint Global (a made-to-order stir-fry restaurant) are all located in the Oval. Centennial is also serviced by scheduled food trucks every day from 11:30 a.m. to 1:30 p.m.

Jordan Prosser, a transfer student studying biology, likes to eat at the various places in Talley—Los Lobos and Jason’s Deli being her favorites. Prosser transferred from UNC-Chapel Hill this year, and said there weren’t many places to eat on campus there, leading her to spend money elsewhere. But at NC State, she enjoys being able to swipe her Wolfpack One card and use her meal plan and dining dollars.

Wiley advises the incoming freshmen to try new things. “It’s easy to go to Chick-fil-A everyday,” Wiley said, “because you’re familiar with it. But check everything out. Eat around and see what you like.”

Chick-fil-A is located in the Atrium Food Court connected to D.H. Hill Library and is open on the weekdays. In the same building are Brickyard Pizza and Pasta, Delirious Wraps and Salads, Smoothie U and Zen Blossom, which offers sushi, egg rolls and stir-fry creations.

In addition to trying a little of everything, Prosser’s tip to new students is to alter their eating schedule. “Eating at weird times of the day is better,” Prosser said. “That way, you’re in there when no [one] else is.” Prosser likes to eat at 2 or 3 p.m. to avoid the inevitable campus lunch rush.

Don’t limit yourself to only using your meal plan though. Hillsborough Street, which is just north of campus, is lined with restaurants. Chipotle, Insomnia Cookies and Jersey Mike’s Subs are frequented by your fellow students and are a short walk from class. There are also apps like Tapingo and OrderUp that allow you to order food online from select places on campus in advance so it’s ready for pickup. Or use them to get delivery from fast food places in Raleigh.

Garland, Wiley and Prosser all agreed on one thing; it’s boring to eat the same thing every day.