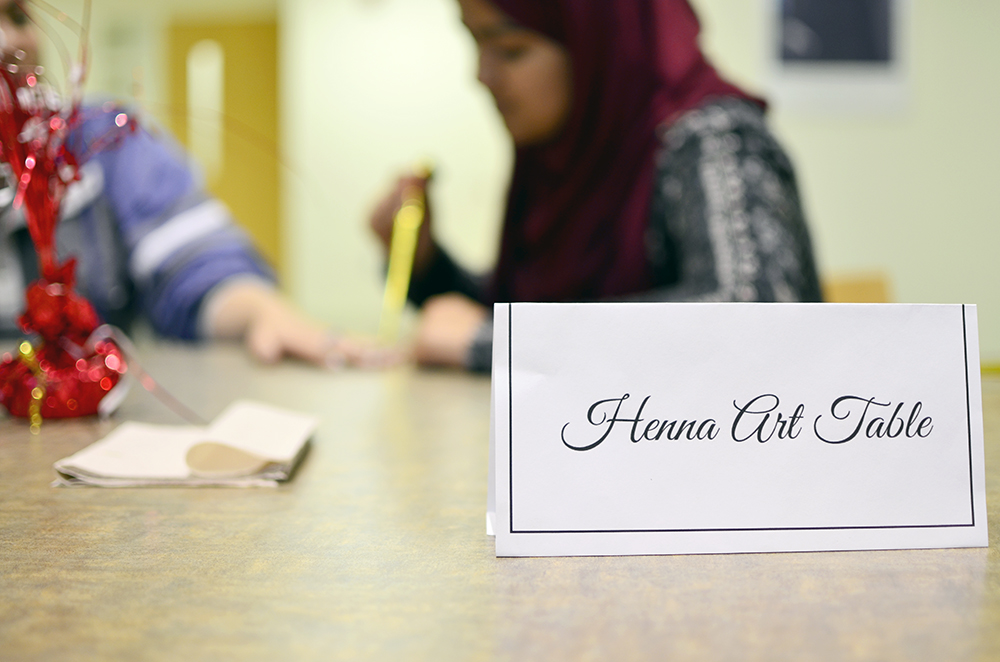 Jordan Taylor/Staff Photographer
The Islam Fair was held in Riddick Hall and featured several small panels for guests to speak with leaders in the local Muslim Community. The Henna table performed Henna tattoos on guests, there was a panel about the basics of the faith, the women in Islam, Jesus Christ’s role in Islam as well as a modern Islamic point of view.

On Tuesday, Oct. 25, NC State’s Muslim Student Association, MSA, hosted their annual Islam Fair as part of Diversity Education Week. The event was centered on education and discussion about Islam.

Shiraz Ahmed, a fourth-year student studying international politics, co-outreach chair of MSA and primary organizer of the event, said the Islam Fair was also a part of Da’wah.

“Da’wah is an Arab term which means invitation to Islam, and outreach is a part of that,” Ahmed said.

The Islam Fair was tailored specifically toward the non-Muslim population on campus with the goals of educating people on the basics of Islam, discussing contemporary issues in Islam and communicating with those unfamiliar with Islam. The event included refreshments and the opportunity for attendees to get henna tattoos.

“We’re building a relationship with the community,” Ahmed said.

The Islam Fair attracted a plethora of students from different backgrounds, faiths and academic disciplines. “I’m really interested in the religion,” said Hanna Lawrence, a first-year student studying business, “and I feel it’s important to learn about religions different from my own.”

Gabriella Dangler, a first-year student studying engineering, said, “My boyfriend practices Islam, and I wanted to see how his views on it compared to other people’s views. His parents are from Sierra Leone, West Africa, and I wanted to see (how) the cultural influences on the religion was compared to Middle Eastern culture and American culture. Like, the differences in cultures and how they affect religion.”

There were four main discussion topics: “Basics of Islam,” “Women in Islam,” “Jesus in Islam” and “Religion, Culture, and Islam’s Place.” Each topic had a station with speakers, and attendees rotated between stations in groups every 15 to 20 minutes.

Ahmed chose knowledgeable speakers for these topics who have contributed to previous MSA events. Some of this year’s speakers had participated in past Islam Fairs.

“Basics of Islam” was headed by Fiaz Fareed, Da’wah (Outreach) chair of the Islamic Association of Raleigh, the IAR. He talked about the Five Pillars of Islam, Six Articles of Faith, and the history and culture of Islam.

“If you do research and see how the woman has been treated through history, you’re going to find out that women have been treated unfairly,” Khdour said. Khdour provided examples from different ideologies–ancient Greek religion, Christianity and Judaism, to name a few.

According to Khdour, across these faiths, women were seen as unclean, impure, shameful and had to fulfill the pleasures of men, and the emergence of Islam brought Muslim women the right to work, to education, to earn money and to free speech.

Isa Ibn Matta, from the Al-Hirz Institute and a graduate student studying Islamic Studies, presented “Jesus in Islam.” “The way that we as Muslims believe in Jesus acts categorically different than a lot of belief systems today,” Matta said.

Matta talked about Jesus as an astrotheological literary hybrid, “the personification of a human being described in astronomical events. For example, the twelve disciples being twelve constellations, and the son of God literally being the Sun in the sky.”

Jesus is personified differently across different faiths. “It literally brings people together and separates people,” Matta said. “We as Muslims believe that Jesus is the Messiah.”

Matta continued, “The Word of God was sent and born through the miraculous birth to Mary. Believing in Jesus is actually a prefect of our faith. If you don’t believe in Jesus, you can’t be Muslim.”

Dr. Amin Asfari, who is also from the IAR and a professor of criminal justice at Wake Tech Community College, discussed “Religion, Culture, and Islam’s Place,” focusing on how Muslim people integrate their faith with their American identities and into American society.

America is a multicultural society, and Asfari used the multiculturalism spectrum to explain the key difference between integration and assimilation.

“The very right of multiculturalism says, ‘Ok you come from India or Zimbabwe or whatever, that’s great,’” Asfari said. “‘So long as you shed everything there is about that, including your language, we’ll accept you.’” This is assimilation.

“Left-wing multiculturalism says, ‘We’ll accept you and your differences,’” Asfari said. “That, by definition, is America–a melting pot.” This is integration.

According to Asfari, groups were perceived as threats to the dominant culture include women with the woman’s suffrage movement and African Americans with the Civil Rights Movement. After 9/11, Muslims were affirmed as a threat group in the American psyche, and the American media, especially the news, contribute to that perception.

“Who’s been in the news media talking about Islam?” Asfari said. “Muslims? No, non-Muslims have co-opted the narrative, and they’ve told us what Islam is about. That puts Muslims in the spotlight, and that’s great because it coerces and forces us to try and struggle and give our own narrative. Part of the process is understanding we’re a victimized group, we’re being outcasted. They’re trying to outcast and marginalize us, so we have to prove ourselves.”

Attendees and MSA members expressed how important events like the Islam Fair are for NC State organizations to host on campus.

Lauren Emer, a first-year student studying biological sciences, said, “A lot of times people are hateful and disrespectful out of ignorance, and the best way to combat that is to educate.”

Sinthia Shabnam, vice president of MSA and a third-year student studying public policy and sociology, said, “As long as everybody here walked out with something new to think about with a little bit more open mindedness–that’s what’s important to me.”

“Organizations bring life to campus,” Ahmed said. They connect people and foster a welcoming environment in which we can understand each other’s differences and similarities, which, according to Ahmed, is essential for a healthy society.

For information about upcoming MSA events, or if you’re curious about Islam and would like to learn more, you can visit the MSA’s organization page at orgs.ncsu.edu/msa/ or contact them at ncsumsa@gmail.com. The next MSA general body meeting will be Thursday, Nov. 2 at 6 p.m. in Riddick 301.