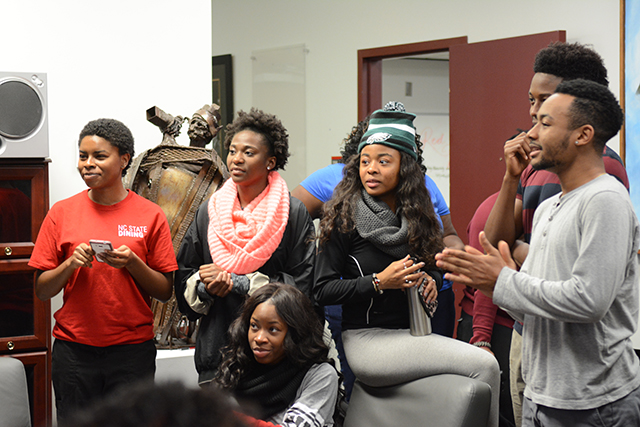 The same could be said about the student group GLBTCA’s watch night party. J Hallen, a senior studying business administration with a minor in Russian studies and president of GLBTCA said, “GLBTCA strives to get students involved in the political process as much as we can. We’ve had debate watch parties for every single debate as well as a series of walk to the polls events. This is the final event in our series, we’re just trying to make sure that everyone has a easy place to access results as they’re coming in and react to that in any way that they see fit.”

Both Hallen and Zeigler spoke on how the election would impact their community. “I’m hoping for an outcome that favors my community. I think even if it’s not that outcome, we still need to find a way to fight through it, come together and use this as motivation,” Zeigler said.

Hallen’s biggest concern is that when President-elect Donald Trump picks the new Supreme Court justice marriage equality for the LGBTQ community will be in danger. “Trump getting Supreme Court picks, from a pro-equality standpoint, is horrendous. There are multiple cases regarding trans [transgender] issues specifically that are going to be especially dangerous,” Hallen said.

Early in the evening both watch night parties had relaxed atmospheres filled with laughter, however as the night drew on, many appeared anxious and even upset.By the end of the evening, many were in tears. A Trump administration seemed dangerous and frightening.

Will Hastings, a senior studying political science, had been following the election night coverage since seven pm. He never imagined he’d see President-elect Trump get this far.

Hastings is also worried that President-elect Trump will repeal progressive policies set in place by President Obama and his administration.“With the Obama administration, we have come so far in terms of progressive issues. We have progressed so much socially, legally, politically,” Hastings said.

While many have concerns about what this election means for marginalized groups nationwide, Hallen has concerns for LGBTQ students right here on campus. “If HB2 remains in place and especially becomes more prevalent in the UNC system because of future court cases that would come about due to Trump’s victory and therefore his Supreme Court picks we could see a lot of trans students and general LGBT students being treated in a much more negative manner on campus.”

Regardless of religion, race, creed, sexual orientation and gender identity, this election season has been a tumultuous one for many. While some are excited about President-elect Trump, many are engulfed by fear, uncertainty, anger and a host of other emotions. As election night neared it’s end Hastings remarked “I feel like, across the board, at least with my friends here, we’re all really nervous.”