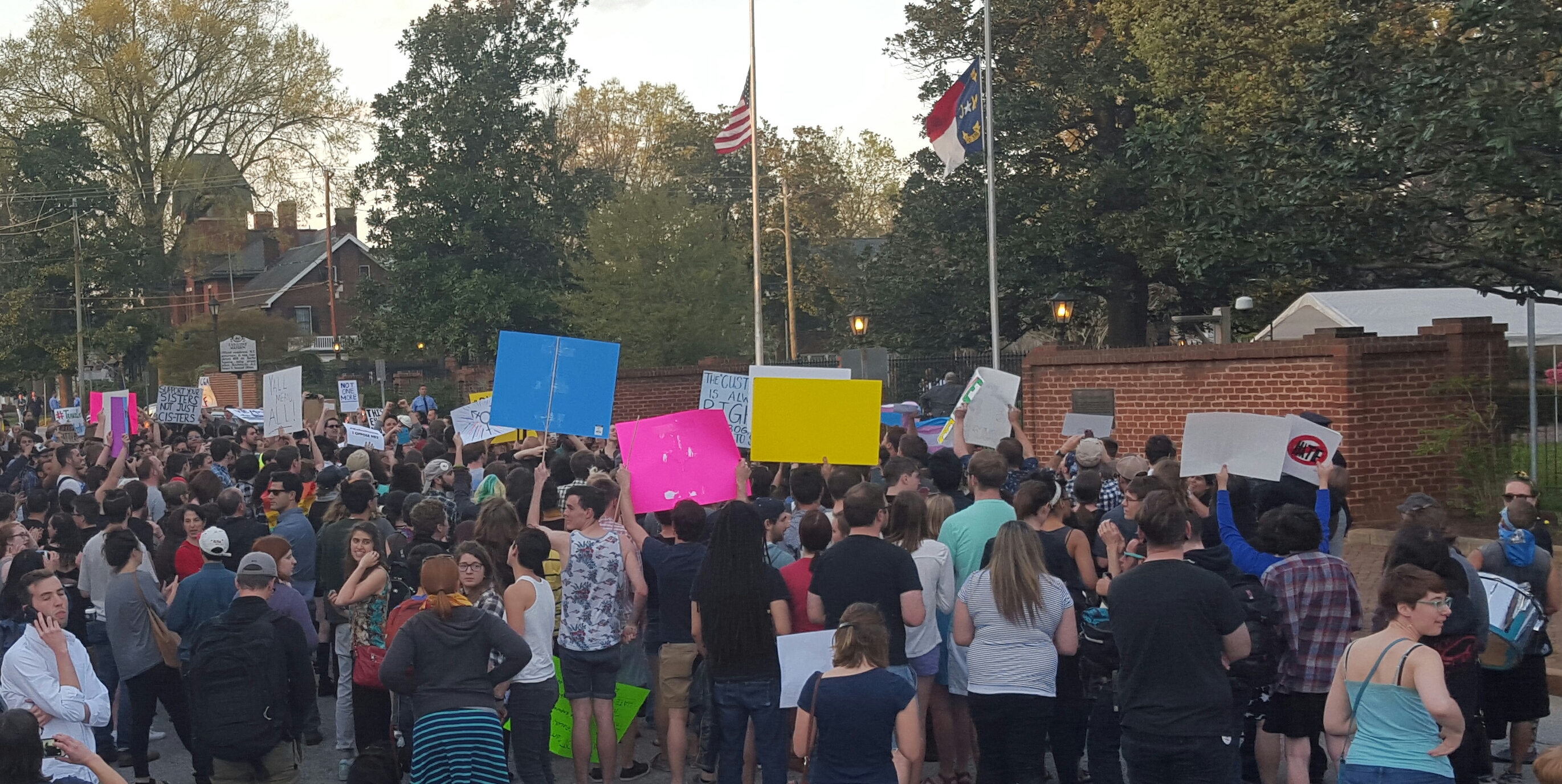 As the sun set on downtown Raleigh yesterday, protesters surged into the street in front of Governor Pat McCrory’s home to express their frustration and disappointment concerning House Bill 2.

McCrory signed the bill late Wednesday night after the General Assembly had a special session to . This was “reactionary,” according to Nicholas Casale, a junior studying electrical engineering that attended the rally.

He believes they only did this in response to Charlotte’s anti-discrimination ordinance that was supposed to go into effect on April 1. This ordinance would have expanded protection for the treatment of individuals at hotels and restaurants based on sexual orientation and gender identity.

McCrory said the ordinance “defied common sense, allowing men to use women’s bathroom and locker room for instance. That’s why I signed bipartisan bill to stop it,” on his Twitter account Wednesday night.

The new legislation, the Public Facilities Privacy & Security Act, is a statewide policy that makes it illegal for anyone to use a public bathroom that does not correspond to their biological sex. The bill also allows local nondiscrimination laws to be passed to the state government, but it notes that state laws preempt any local ordinances.

Quasima Wideman, a former NC State student and the main organizer of the rally said the #BlackLivesMatter and Queer People of Color Coalition felt their voices were not being heard. This was especially true for those that attended the bill signing on Wednesday.

Wideman said the only person of color that was allowed to speak was a “very homophobic and transphobic” black pastor.

“These people in power are not here for us. They don’t believe our lives have value,” said Wideman.

The rally began at 5:45 p.m. It was fairly quiet at the start as Wideman read the Coalition’s statement and reasons for holding the event.

One major reason they held the event was to commemorate the suicide of Charlotte trans teen and activist Blake Brockington. Brockington was the first trans homecoming king in a North Carolina high school. This was the one-year anniversary of his death.

His suicide has been one of six reported so far this year, drawing attention to the isolation and marginalization felt by trans individuals nationwide.

“This is not about just a bathroom,” said Eva Panjwani, another organizer of the event that lives in Durham and works with the statewide Queer and Trans People of Color Coalition.

Yerson Padilla, a senior studying women’s and gender studies, also came to the rally to show support for the gender and trans community in and around NC State.

“Seeing the amount of support and the public shaming that he’s [McCrory] getting is great,” Padilla said. Almost on cue, the crowd began chanting “shame on you.”

A Day in the Life

Are surprise albums the new normal?