If you haven’t heard and are completely oblivious to the world around you, Chris Brown got a new tattoo. Of course, it wouldn’t be enough for the tattoo to be a simple Bible verse, or some more stars. Instead, this idiot decided to get a woman’s battered face inked on his neck.

Brown told sources that the tattoo is a sugar skull, associated with the Mexican Day of the Dead, which he decided to get after seeing a M.A.C. cosmetics advertisement depicting the skull.

Brown was charged with one count of assault with the intent of doing great bodily injury in 2009 to his then-girlfriend Rihanna.

The new tattoo Brown got, shockingly enough resembles the image of Rihanna that surfaced on the web, after their domestic dispute.

Brown’s idea to get a tattoo of a battered woman completely baffles me. Whether the tattoo is of Rihanna or not, it is still of a battered woman. I would think that Brown would try to stay as far away from any associations or references to abuse as possible, especially since he is so sensitive to the topic of his and Rihanna’s tumultuous relationship. (Remember the Robin Roberts interview?) What message is he trying to send to the public?

In 2009, after pleading guilty to the charges against him, a remorseful and deeply saddened man was portrayed to the public, one with intentions to better himself due to the events that occurred. It seems though, that now that things have cooled off, Brown is back to normal. He is now back to making music, public appearances, and even dating someone new, and making poor decisions.

As a fan of Brown’s music, I am disgusted with the tattoo, a little bit surprised at the shear disrespect, and shocked at how stupid this boy truly is. This tattoo will be on his neck forever, and if his decision to get it shows that he will likely continue to live his arrogant life and not be affected by public opinion. Does that sit well with you?

I don’t think that it is OK for Brown to continuously act like the world is his playground where he cannot be touched.

Yet, we who listen to his music and go to his concerts help encourage this behavior. Some try to claim that it’s his music that they like, not Brown as an individual, but see here’s the deal. You cannot separate the two.

Brown is an artist and his music is an extension of who he is. Whether listening to his old hits like “Run It,” or his newest single, “Sweet Love,” I feel that it is hard to claim you don’t condone his actions when you know the lyrics to all of his songs.

Ultimately, this new tattoo wasn’t the best idea for Brown who constantly holds up a (figurative) middle finger to the world, not thinking twice of the consequences of his actions. Whether or not we allow him to continue to get away with it is up to us. 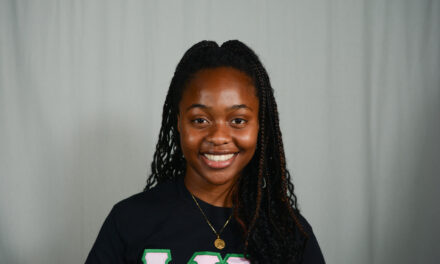 Being Muslim at NCSU

Supporting Survivors: The Importance of Community