Student Media has taken a considerable turn this year. Bradley Wilson, former Student Media adviser and veteran of administering all campus student publications for several years, has left the university. Wilson held the position as Student Media’s adviser for nearly nine years, overseeing all campus publications and media outlets since December 2002. Based on sources, after attending a workshop that took place a less than a month after a blunder in Student Media, Wilson returned to find out his job as the adviser would be discontinued on August 2nd. The Student Press Law Center believes that there is a possibility that Wilson was fired due to controversy this summer on campus surrounding student publication, The Brick.

The Brick is a handbook that showcases the student traditions of NC State, and is put together by Student Media along with Student Government, the NCSU Alumni Association and the First Year College. This summer’s edition of The Brick included a photo of the derogatory and racist graffiti in the Free Expression Tunnel that took place last semester, which started uproar amongst students.

The decision to dissolve Wilson’s “coordinator” position was made by Michael Giancola, director of the Center of Student Leadership, Ethics, and Public Service, who served as Wilson’s supervisor. Wilson’s position was an at-will position (EPA position), which can be terminated for any reason or no reason at all. Giancola made a statement to the SPLC disputing a connection between Wilson’s termination and The Brick incident.

The SPLC also wrote a letter to Dr. Thomas Stafford, the Vice Chancellor for Student Affairs, expressing concern over the “sudden and suspiciously timed removal of Wilson.” In the letter, the SPLC also mentioned that Wilson “undoubtedly is a taskmaster whose forcefulness is not to everyone’s liking,” which could also have easily played a part in his termination.

In spite of the possibility that Wilson was fired over this incident, several others including Wilson’s colleagues have made remarks denying that it is the reason. However, a couple of the students who worked closely with Wilson are suspicious of the termination.

The university now wants to move forward with the search for a new director of Student Media. Until a new director can be found, additional advising duties have been distributed among the remaining professional staff members to remedy the situation until the new position can be filled. Another position which has been affected by the termination of Wilson is the IT position which had been narrowed down to several candidates before Wilson was let go.

During Wilson’s time at the university, Student Media won several awards and honors. To many, it is a disappointment to see Wilson go after so many years, however, ciphering through candidates and finding a distinguished replacement is the first concern. Student leaders will also be involved in the selection of the new adviser.

The SPLC plans to keep a close eye on the search and stated in their article that they hope that Student Media hires someone who has similar credentials to Wilson; one who is independent –minded, as well as a person

Standing Up for Your Beliefs 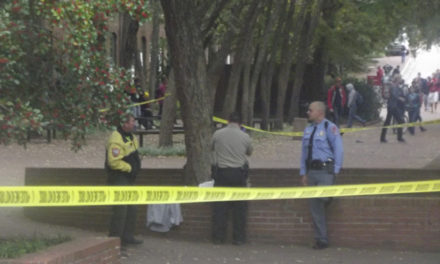