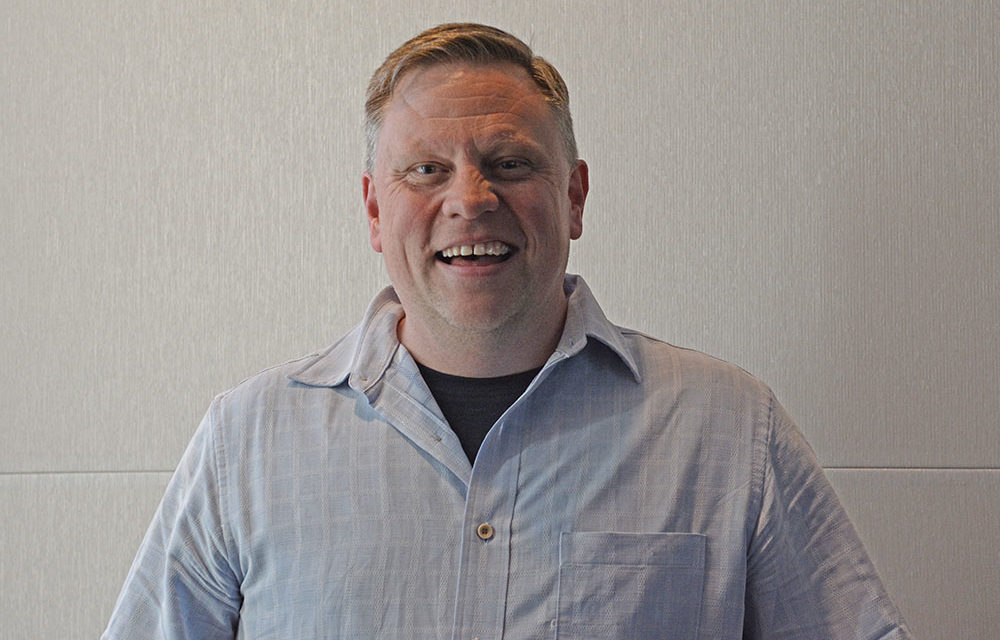 Swathi Karthik/Nubian Message
Josh Burford, a historian that advocates for transgender and queer communities across the country, presented the Week of Action 2019 keynote address on Monday, April 1, 2019 at Talley Student Union. The event was hosted by the GLBT Center.

On Monday, April 1, the GLBT Center hosted Josh Burford, queer archivist and historian, as their Week of Action keynote speaker. Burford’s background as an activist-turned-archivist followed suit with the Week of Action’s theme of advocacy around intersectional social justice issues.

He specifically discussed the history of radical queer activism and the future of queer advocacy work. Burford stated that his archival work stemmed from the lack of queer history in education systems.

“There’s an ongoing problem,” Burford said. “Queer people don’t have access to their history. Less than 17% of all students…have access to any kind of queer history. That’s in the entire United States.”

Burford is currently working on The Invisible Histories Project, a project based in Alabama collecting queer and transgender history in the deep south.

Burford stated that his goal was to give queer history back to the queer people. Much of this history, Burford said, is instrumental in understanding past queer advocacy work and the stereotypes surrounding the lives of queer people today.

Throughout his speech, he described groups such as ACT-UP, a group formed out of necessity in the 1980s. The group worked to advocate for people suffering from HIV and AIDS when they were being ostracized on multiple fronts. They utilized street political theater to create disruption—disruption that Burford got to witness for himself.

“They held what they called die-ins,” he said. “I went to my very first political action in 1994 in front of the CDC [Centers for Disease Control and Prevention] in Atlanta where all of the HIV positive people laid in front of the CDC and covered themselves with pigs’ blood.”

According to Burford, this group brought attention to anti-assimilation tactics and forms of advocacy. He also stated that assimilation into society was one of the many goals that the white, wealthy queer community utilized to maintain wealth. Thus, resulting in the push for marriage equality and the “love is love” mentality which Burford says cost over $1 billion to accomplish.

“As our numbers for homeless youth get larger,” Burford said, “as the suicide rate of trans people gets higher and higher, as the wealth gap of the most wealthy in the north and the poorest in the south get farther and farther apart, we start selling this idea of love is love. And people want to get married.”

Burford provided multiple counterpoints to the very popular “love is love” mentality and the global advocacy for gay marriage.

He stated that this movement often took financial support away from other disadvantaged groups and ultimately did not fix the issue of discrimination and negative stereotypes surrounding queer people.

“Did we really imagine that it was going to take a billion dollars to do that?” Burford asked. “I mean, even if we took off a tiny little shave off the end of that, we could have easily have given that to homeless people, the elderly. Especially queer elderly people who are going back in the closet so they can get health care.”

From there, Burford began to discuss issues the queer community faces today.

According to Burford, the number of homeless queer youth is also steadily rising. So, Burford asked, what changed? He believed that the organization of advocacy groups and lack of representation could be factors, along with little financial support.

In order to combat this issue, Burford stated that he aims to inspire younger generations by giving them access to information about activists from past generations.

“What I want to give you is your own history back,” he said. “Because if you can imagine the amazing stuff that was happening, just within the last 30 or 40 years in this country, if you look at how organized we were, how angry we were, how happy we were to be queer in the same space, if you can know what your past is, you might be able to imagine what the future might look like.”

While Burford and The Invisible Histories Project is not currently collecting in North Carolina, NC State students can still access queer history in the GLBT Center on campus.

“We also have an archive through the GLBT Center that we’re looking to integrate into the university special collections,” said Andy DeRoin, program coordinator of the GLBT Center.