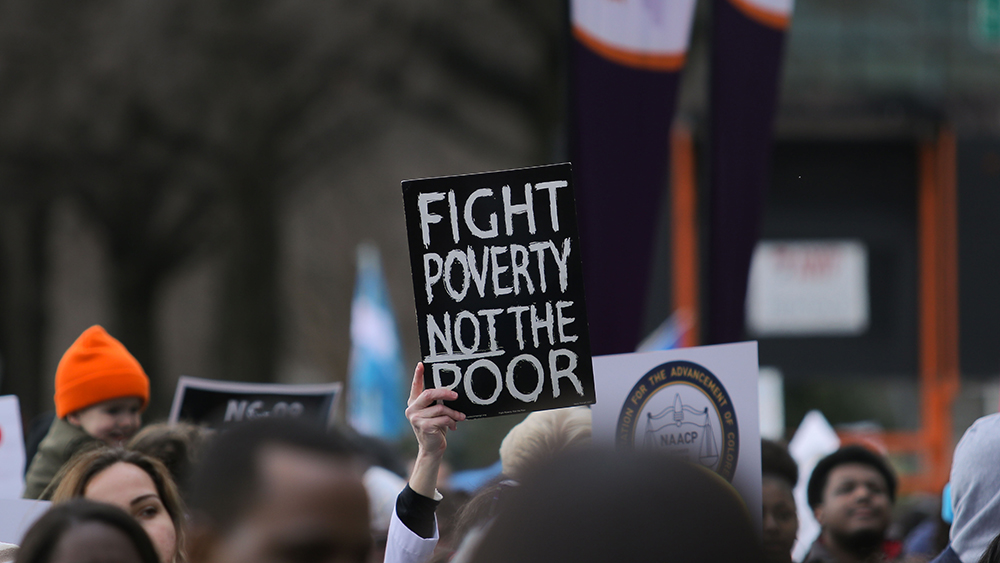 Aditya Penumarti/Nubian MessageA sign that reads “Fight Poverty Not The Poor” is held up during the march at the HKonJ Moral March on Saturday, Feb. 9 in Downtown Raleigh.

The 13th annual Historic Thousands on Jones Street (HKonJ) march was held on Feb. 10 and organized by Rev. William Barber and the NAACP of North Carolina.

Attendees began the day by marching in solidarity throughout the city and ended on Fayetteville Street listening to a group of speakers hosted by the rally.

Speeches covered a broad range of topics, including income inequality, the endangered state of voting rights in North Carolina and the recent strain of ICE raids which impacted around 200 families in the state. Barber’s keynote speech delivered a powerful message about the necessity for activists to continue to engage in politics until their demands for a more fair and just society are met. Hundreds of people attended the assembly, ranging from student activists to concerned citizens and healthcare professionals advocating for universal healthcare. NC State students Ryan Maxwell, Mihai Anghel, and Aaron Amusan attended the rally in support of the messages that were brought up at the rally.

Maxwell, a fourth-year studying fisheries, wildlife and conservation, said, “In my major, we don’t really hear about anybody that represents these issues. I almost thought it wasn’t a thing that happened in Raleigh at all. So it was a good experience to see all these issues come together.”

Anghel, a fourth-year studying business administration and finance, emigrated to this country 11 years ago with his family. For him, coming to the HKonJ rally was an opportunity for him to hear the experiences that current immigrants are going through.

“A lot of the issues that are happening now (like ICE raids) did happen back then,” Anghel said. “It’s crazy to see the difference between 11 years and now. The things people are going through now are not right.” Unitarian Universalist perform at the Moral March on Raleigh on Saturday, Feb. 9, 2019. The group centers around the idea of inclusion for all religions, nationalities, and sexual orientations. (Sindy Huang, Nubian Message)

During the speeches, two counter-protestors made their way into the mix of the protest, brandishing confederate flags. Part of the crowd dispersed to argue with the counter-protestors. For University of North Carolina at Chapel Hill students Annie Simpson and Lindsay Ayling, this type of presence of counter-protestors was nothing out of the ordinary.

Simpson, a fourth-year studying studio art, said, “In Chapel Hill, this is something we are used to all the time. We know the drill, you don’t engage and you try to limit press engagement with them. You try to limit the platform they can get and limit ways for them to get their message out there.”

The two did exactly that by covering the Confederate flags from the view of media members cameras with a UNC-themed banner.

Ayling, a graduate student studying history, further explained why they approached these protestors while the media was there: “The reason we will come up is that we’re trying to block the flag and prevent the Confederates from speaking to the press.”