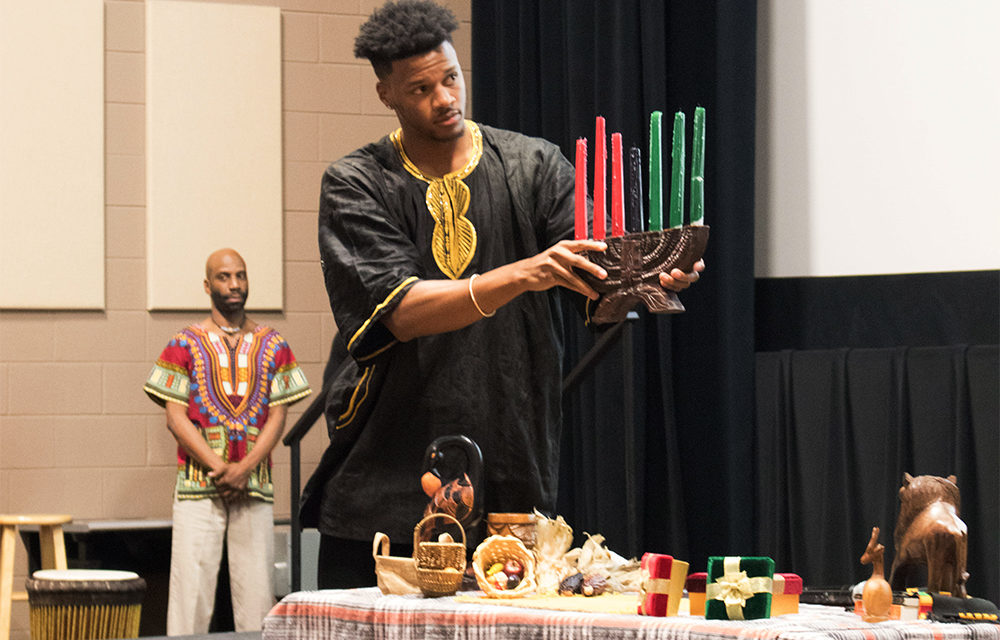 Student leaders and staff introduced the seven principles—Nguzo Saba—of Kwanzaa in the order they are celebrated: Umoja, Kujichagulia, Ujima, Ujamaa, Nia, Kuumba, Imani. Each introduction was followed by a performance that embodied the spirit of the principle.

“This year we are excited to celebrate Kwanzaa through spoken word, movement and recognizing the importance of leadership entrepreneurship and wellness in the black community,” said Achaia Dent, a fourth-year studying psychology and AYA Ambassador.

The first question: With everything anti-black going on in the world, how do I stay focused on being a student?

“I think the most important thing is being mindful and self-aware of how these things are affecting us personally,” Hill said. “And from there having a good sense of your racial identity.”

Hill said students should also be mindful of their educational goals and keep them at the forefront.

Another question asked about self-care.

The final question: Race wasn’t important to me until now. How do I deal with white people, whiteness and their foolishness?

This question was met with snaps from the audience.

Jenna Nabors, a second-year studying communication, attended the Kwanzaa celebration for the first time this year.

“I thought it was very interesting and it exposed people to a culture they were unfamiliar with and I wish that more people were appreciative of cultural diversity,” Nabors said. “I feel like people were in culture shock a bit because they were unfamiliar with what they were seeing, which is understandable, but even when you experience culture shock I feel like you should appreciate it rather than judge it.”

The program began libations and performances by AACC artists-in-residence Willie Hinton and Robert Corbitt. Then attendees stood to sing “Lift Every Voice and Sing.”

“The name ‘kwanza’ with one ‘a’ means first fruits. It is derived from ‘matunda ya kwanza’ which means ‘first fruits,’” said Bria Swann, a fifth-year studying nutrition science and chairperson of the Afrikan American Student Advisory Council. “Kwanzaa is not a religious holiday but a period of time to reflect upon the context that black liberation exists.”

Incoming AYA Ambassadors were also inducted during the ceremony. These ambassadors help facilitate student engagement at the AACC.

“I thought it was very eye-opening and it was great to see and be involved within that,” said Julia Krauss, a first-year studying engineering. “That was something I wouldn’t normally get to experience.”

The celebration ended in a harambee circle. Harambee is a Swahili word which means “let us come together.”

See the full gallery from the Kwanzaa Celebration