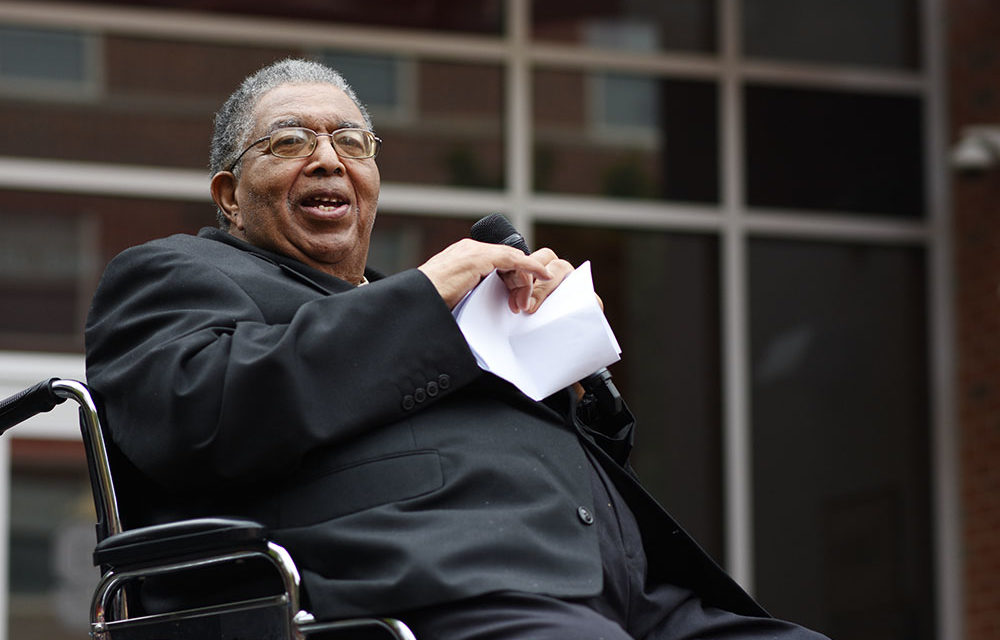 On Nov. 1, NC State’s University Commons was officially renamed Holmes Hall to honor Irwin Holmes Jr., the first African-American to earn an undergraduate degree at NC State and first African-American athlete to participate in the Atlantic Coast Conference. Holmes graduated with a bachelor’s degree in electrical engineering in May 1960.

NC State students, faculty, staff and alumni gathered on Cates Avenue to witness the renaming. Speeches were given by university officials, like Chancellor Randy Woodson and Debbie Yow, the director of athletics, as well as the honorary guest, Irwin Holmes.

“I would like to thank NC State for bestowing this honor on me,” Holmes said. “This is something I would not have ever imagined that the university would think I was qualified to receive.”

Holmes suggested that the building’s renaming signified an important moment not only for him, but also for the university.

“In doing this today,” Holmes said, “not only are they honoring me, but I feel that they are honoring themselves in a big, big way. And all of you out here today can join me in making sure we continue and improve.”

Jalen McGee, a Goodnight Scholar and third-year studying industrial engineering, highlighted Holmes’ legacy at NC State as the first African American to graduate, saying, “Thousands of minority students have followed Mr. Holmes’ path and walked the bricks at NC State, honoring the legacy he left behind.”

“I’m fortunate to be one of them,” McGee added.

“Irwin was among a select group of students from his freshman class to graduate in four years,” Woodson said, “and I have to tell you in those days, very few engineering students graduated in four years.”

Louis Martin-Vega, the dean of engineering, addressed the importance of Erwin’s accomplishments to black students, calling Holmes “more than a role model.”

“You are an existence proof to Jalen and many others who see in you who they are and who they can become,” Martin-Vega said.

Among the attendees was Jamila Simpson, interim associate dean for Academic Affairs, who said that viewing the event was “an honor.”

“His heart is loving and humble and he is making us a better institution,” Simpson said. “We are a better institution because of his legacy and him coming to NC State, and he makes us better as a students as well, because when things get tough for us, we have him as a role model to persevere through that.”

Elizabeth Reidy, a second-year studying business administration, said, “It was nice for NC State to honor someone who was able to initiate change.”

Daniel Cozart, a fourth-year studying psychology, said, “I can’t even imagine the adversity he had to go through to get to this point, but the fact that we are here says a lot. His legacies, his battles, his endurance, it says a lot. It made me feel like I deserve to be here and I’m meant to be here.”