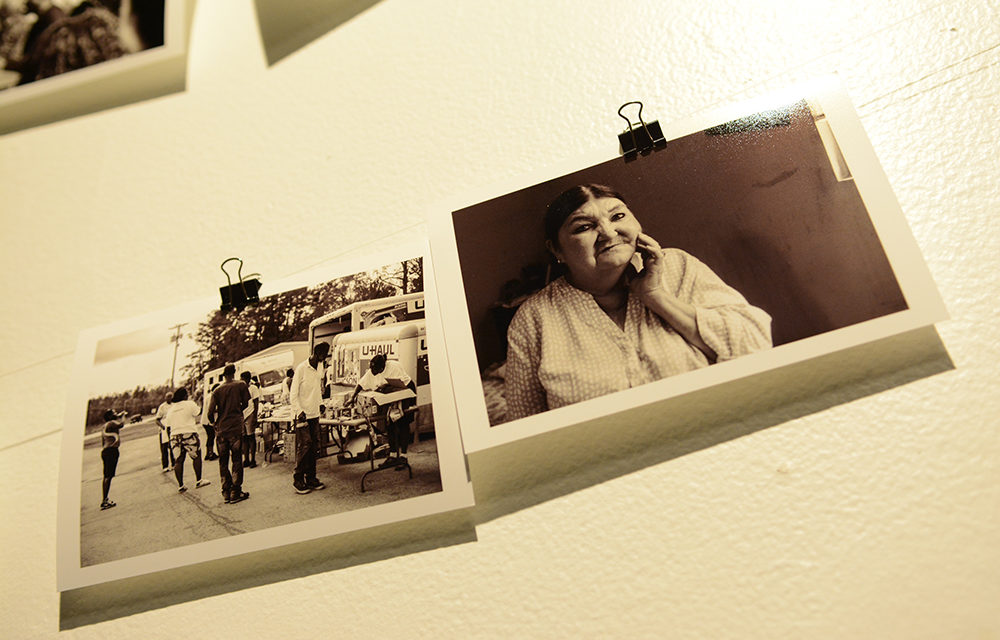 The GLBT Center and the African American Cultural Center (AACC) partnered to host the opening reception of “Artivism: Advocacy and Activism through Art,” an exhibit showing from October 15th to November 4th in the AACC Gallery in Witherspoon Student Center. The idea for the exhibit is credited to Preston Keith, associate director of the GLBT Center.

“As I was planning GLBT History Month,” Keith said, “I knew that I wanted the focus of the month to look at the different ways people come into activism, being strategic in that and also understanding that activism is much more than just organizing riots and protests. [There are] different modes of activism.”

Keith continued, “Art was something that I wanted to incorporate into that and knowing that a lot of people have utilized art as a form of resistance and a form of advocacy, really highlighting that.”

John Miller IV, program coordinator of the AACC, said, “We were happy to partner with the GLBT Center, especially with such an important topic, especially at this point in life, society and culture, to really explore activism and what it looks like.”

“Artivism” features works from two local artists: Jade Wilson, photographer and videographer, and Rachel “Gemynii” Storer, a self-taught painter and DJ. They were both present for the opening reception.

“I did… some searches of artists across the Raleigh-Durham area and came across Jade and Gemynii and fell in love with their work and felt it needed to be in this space,” Keith said. “Once I saw Gemynii and Jade’s work and really looked at why they did the work that they did, it was clear, and they were so gracious in sharing.”

“They didn’t go and just document,” said Miller. “You really feel immersed in their lives, and how their existence is resistance and how they can capture that resistance and produce in a way so someone who doesn’t have the context can look at the work and say, ‘I can see something in here. I can see myself. I can somebody else. I can see what I aspire to be. I can do something.’”

Gemynii contributed an assortment of portraits to “Artivism” that either captured a range of famous black figures in American media or referenced significant social and political movements like police brutality and #MeToo.

“I thought this was a great opportunity,” Gemynii said, “especially with [the gallery] being in the AACC and connected to the LGBTQI [community]. That’s just me, black and queer, so I felt like I needed to be here.”

Gemynii continued, “For me, art is my platform. It’s my voice. When I’m not around to say the things I want to say about bodies, about blackness, about queerness, about social justice in this country, my work can speak for me.”

Wilson’s works included a collection of photos from recent events and protests around Raleigh and Durham and a video of recurring documentary footage from Colorfest Inc.’s Hurricane Relief and Princess Nokia’s performance of “Brujas.”

In addition to activism, Gemynii and Wilson expressed that their art also served as mediums for healing.

“Just the creation process alone is very therapeutic,” said Gemynii. “But also, seeing the responses of folks, especially those that identify as femme or queer, who see these pieces. I see how they’re moved, and how they connect. It makes me feel like I’m on the right path with what I’m doing in life, and that in itself — people seeing their own beauty and finding healing in the pieces — also aids to my own healing process.”

“Having my camera is very healing,” Wilson said. “It gets me closer to people.”

Wilson added, “We need to show up for people and help one another out because life is bigger than ourselves. So holding on to that and reminding myself that I need to be grounded and comfortable in who I am in order to truthfully, honestly and unapologetically share stories of oppressed individuals.”

“I hope students get a renewed sense of activism and advocacy, but also representation,” Keith said. “We talk about black art. We talk about queer art. I want people to see themselves in that. Sometimes, they don’t get to see themselves. So center yourself. Center your voices. Center your identities, but also center the ways in which you’re resisting by just existing, how that challenges systems and how you have that power to transform systems and change culture.

“I also want students to get that activism looks a lot more than just organizing and protesting,” Keith said. “There are so many ways in which we get to embody that activism.”

There was a steady rotation of attendees throughout the gallery, including students, faculty and staff.

“I like when art is used to make a message, and it’s not just there as art. It’s there to mean something,” said John Loomis, a first-year studying meteorology. “When I saw there was this event about the arts and recognizing things you may not even think correlate to the arts, I thought it was a really cool opportunity.”

“Advocacy and activism are two things that are very important to me,” said Mikey Williams, a fourth-year majoring in design studies. Williams expressed that it’s important for NC State to host more events like “Artivism,” especially when “NC State says things like, ‘We have diversity. We are a diverse school.’

See the full gallery from the exhibit opening reception.