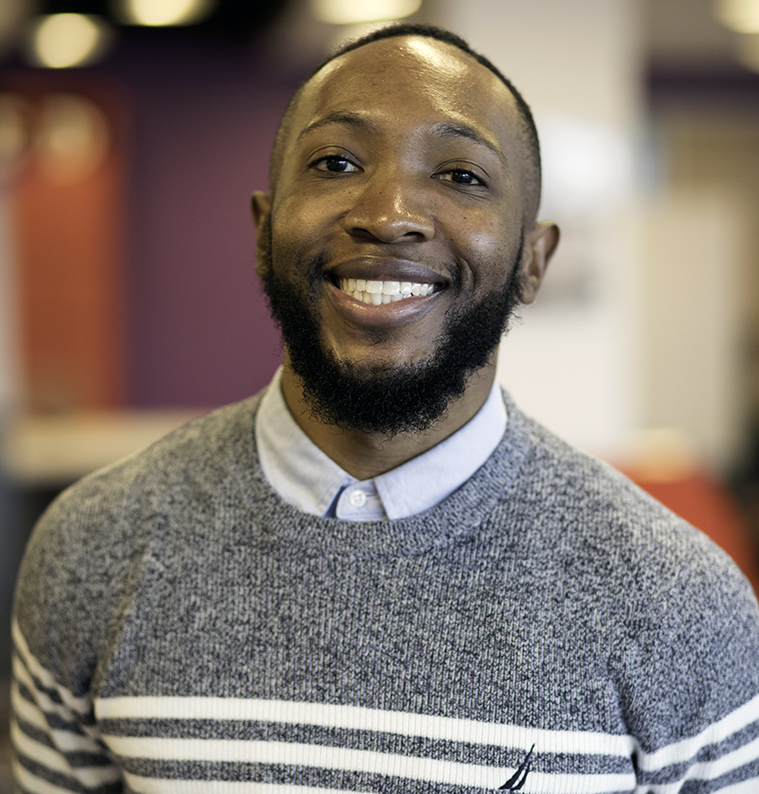 “My primary role is programming for our students,” Hill said. “So coming up with programs that our students will have incentive to come to. Targeting areas of student interest and areas that will benefit our students, not just while they’re here in college, but post-graduation.”

As part of this initiative, Hill coordinates graduate school tours and school visits when community colleges and other universities want to come to our campus. He also advises the TRIO student ambassadors. He said that taking the job is “one of the best decisions I’ve made. It’s a blessing to be here, especially as a young man of color in my specific role. The visibility that this job allows me is very important.”

From there, he went on to UNC Pembroke to earn a master’s in clinical mental health counseling. One interesting thing Hill notes about UNC Pembroke is that it is a historically American Indian liberal arts university.

“It was like a huge culture shock coming from an HBCU where you’re the majority,” Hill said, “to go to a Native-American environment where I had to relearn everything and really kind of adjust and adapt to the cultural norms and the cultural values of that place. And now I’m here at a PWI (Predominantly White Institution), so I’ve been all over the place. But it’s been good for my personal growth. I didn’t plan it that way, but it’s been really cool.”

During his master’s program, Hill got the chance to be a teaching assistant. He was given the freedom to explore his own teaching style, which he felt was integral to his decision to pursue a career in higher education.

“I felt I could be myself in higher ed.,” Hill said. “I didn’t feel like I had to restrict my personality, which is really important.”

Not only did he teach, but Hill got the opportunity to counsel college students as well, which fueled his pursuits here at NC State. “Coming here to TRIO working with a population that I specifically counseled in internships, that was a big draw for me,” Hill said.

Hill graduated from UNC Pembroke in May of 2016, and promptly started at NC State in October of the same year.

In addition to his role with TRIO, Hill also facilitates the support group Men of Color, where he offers counseling in a group setting, as well as a safe space for black men.

“It’s a group that kind of just allows us to just be,” Hill said. “For our students who are here as young men of color, there’s so much that we have to deal with socially just being young men of color, but you come here to a place like NC State that’s huge and you’re outnumbered.

“There’s a lot of weight that’s on their shoulders to kind of present an image that’s not stereotypical,” he continued. “There’s all these small layers of being black and these very minute details of being a black man that you’re constantly battling with, or you’re constantly trying to dispose this myth, or this stereotype.”

The group’s intention is to allow men of color a way to discuss issues specific to their identity as men of color and “to be authentic, to be vulnerable, and talk about issues that are specific to our culture and our ethnic group,” according to Hill.

For all his support and involvement, Hill is not the founder of the group. A former NC State counseling intern, Melvin Gaddy III, began the group during the 2016-2017 academic year. His departure in May of 2017 left a gap that Hill was asked to fill.

“I’m picking up where he left off,” Hill said. “Melvin did a lot of great work before I got here.”

Despite support from OIED and those in the Counseling Center, Hill has faced opposition in the form of questioning the group’s purpose. He isn’t surprised, however.

The Men of Color group meets every Monday at 5:15 PM, either in the Counseling Center or the AACC. For more information and for the location of the meeting for the week, students can contact Hill at bahill2@ncsu.edu.