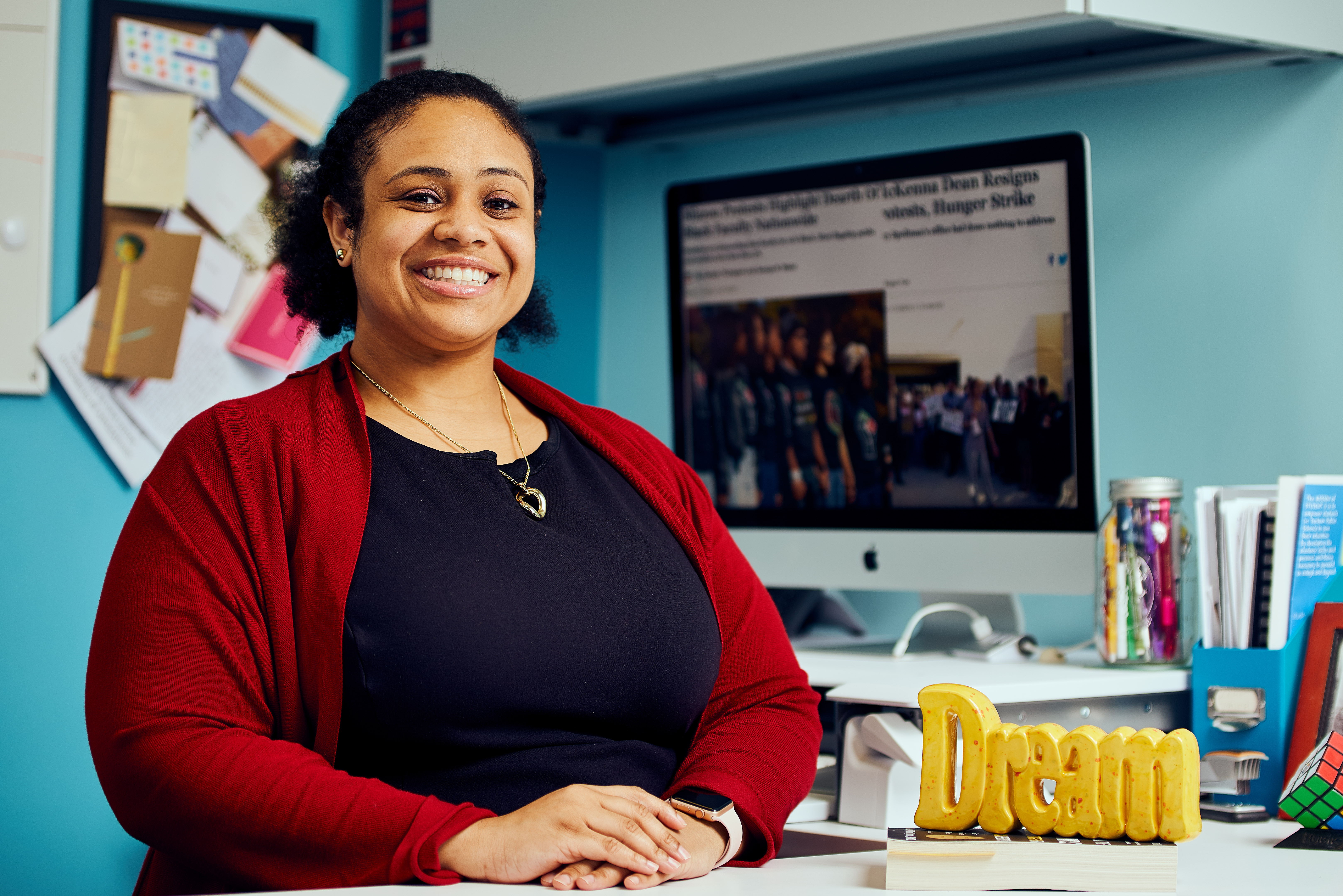 Alex Zachman/Staff Photographer
Dr. Elan Hope is an assistant professor in the Department of Psychology. Her lab’s primary research focus is at the intersection of education, civic engagement, and early childhood development. Originally From DC, Dr. Hope has made Raleigh her home since 2015.

“I came to NC State because I saw a job announcement,” Dr. Elan Hope said. “They said they were looking for a psychologist and somebody who studied community. They were particularly interested in someone who may study marginalized groups and issues of oppression. This is what I do, so I said, ‘Okay, this might be a good place for me!’”

But at the start of her undergraduate career, Dr. Hope studied engineering. “I took 39 credits of engineering my first year,” she said. “It was a little much, a bit ambitious, and I realized I didn’t like it. I wanted to do something a little different with my time and with my classes.”

Her curiosity in education sparked from her observations of her life.

“I got interested in education because that’s where I saw disparities,” she said. “I saw that, on my college campus, black students were underrepresented. Latino students were underrepresented. I saw that from my high school experiences, kids who came from the same backgrounds, the same neighborhoods, had very different trajectories. So I wanted to know what were some of the factors that were influencing that.”

These observations drive the research that Dr. Hope conducts today. Alongside the undergraduate and graduate students of the Hope Lab, she investigates the intersection of academics, activism, psychological well-being and racial identity, focusing on black youth’s experiences of these factors.

“We really look at processes and mechanisms that either support or deter well-being for marginalized youth,” Dr. Hope said. “We try to see what are some internal factors, within the person, and what are some contextual factors, things in the environment, that make things worse or make things better.”

Dr. Hope explained: “There’s a theory called critical consciousness that says people who are under oppressive circumstances need to investigate them—need to think about, learn about, talk about what the systems are that oppress them. Through that learning and understanding, they’ll be best able to act in resistance. So we asked middle school students, ‘What are the problems in your community? What’s going on? Who do you think is responsible, and who’s responsible to fix it?’ We were really trying to get at how do middle school students understand systems of oppression.”

They found that children as young as 12 years old can understand these systems. “They don’t have the language to talk about it like a college student might,” Dr. Hope said, “but they can talk about the government, the politicians, the economic systems, and see how that impacts their lives. They can also talk about individuals and how individuals may make poor decisions, but when they interact with these systems that are structured against them, they can have even more negative effects.”

Next, Dr. Hope and her team will assess the role of parental socialization in these children’s understanding of home, school and the world. This project may be published later this year.

Other projects they’re working on assess the relationship between racial identity and activism and study the factors relating to the increased risk of black and Latino college students dropping out.

Ultimately, Dr. Hope and her students want their research to spark positive change. “If you’re no more or less likely for any of these negative outcomes, then our work is done,” she said.

But until their work is done, Dr. Hope offers three pieces of advice marginalized youth can use to navigate life on campus:

Two: resistance. “That can be resistance in excelling in your school work, in participation in student government, through mentoring in the local community,” Dr. Hope said. “However your skill set matches up, keep resisting.”

And finally, self-care. “Take care of yourself because [having] the end in mind and the resistance won’t matter if you’re gone.”