“I want this to be more like a family sitting around a dining room table…this begins but, I promise you, [that it] will not end the conversation.” These were the opening remarks made by Dr. Jeff Braden, Dean of the College of Humanities and Social Sciences (CHASS), at the Racial Climate Town Hall Meeting held in Caldwell Hall on Tuesday, Nov. 15.

From the infamous “Group-Me Gate” to the white supremacist fliers posted around campus and in our very own Nubian newsstands, there have been a myriad of discriminatory and racist events occurring across campus this semester. CHASS hosted this meeting to give a voice to the voiceless and alleviate tensions within the college.

The Dean’s opening statements were at first met with silence by the dozens in attendance. However, once people began speaking up, it became clear why they were silent at first.

“A lot of us just don’t know what to do. This is uncharted territory for us,” said a faculty member who wished to remain anonymous.

Later, Michael Helms, a senior in religious studies said, “It’s difficult for people who are white and stupid who have comments to come forward if the reaction is going to be critical.” This comment, among others, highlighted the reality that those who are privileged may not know how to address these issues and may be afraid to come forward.

The focus of the conversation later changed to how minorities may be able to be better understood by all. Samantha Alverson, a junior studying sociology, was one of the few who came forward with different ideas. “We have classes that are not required for everybody, including minorities,” Alverson said. “When you don’t include minorities in the mandatory classes, that tells everybody that minorities are not important and minorities will not be heard.”

She also brought up the point that faculty are often told to keep quiet regarding sensitive issues, such as race, and that many of the organizations which address these issues are student led, not faculty led.

An NC State graduate, Tamara Hayes, pointed out that there was an element of “preaching to the choir” in these talks and their audiences. “My challenge to the University is to reach out to the folks who don’t get it,” Hayes said.

Minority students made sure that their voices were heard during the town hall event. Alexis Carson, a senior studying science, technology, and society, summed up her daily feelings.

“People don’t understand how it feels seeing all these racist things going on around campus and then sitting in a classroom as the only colored person there, feeling as if everyone is staring at you,” Carson said. She later went on to explain that those who are not directly affected cannot understand how deeply these issues alter the state of being of those who are.

Dr. Elizabeth Nelson, a Communication Teaching Assistant Professor,later spoke the words that seemed to resonate most with the audience. “I’m speaking out to the white people right now; educate yourselves. There are a ton of resources. You can start showing up to events like this one.”

Everyone’s voices were well heard, and the message was received by Dean Braden, as evidenced by his closing remarks. “Hearing, listening, and understanding is not enough. We need to move past talking and into doing. We need to create an environment in which all of us feel that we are valued, we are respected, we are appreciated for who we are.” 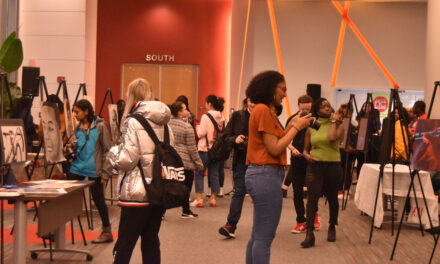